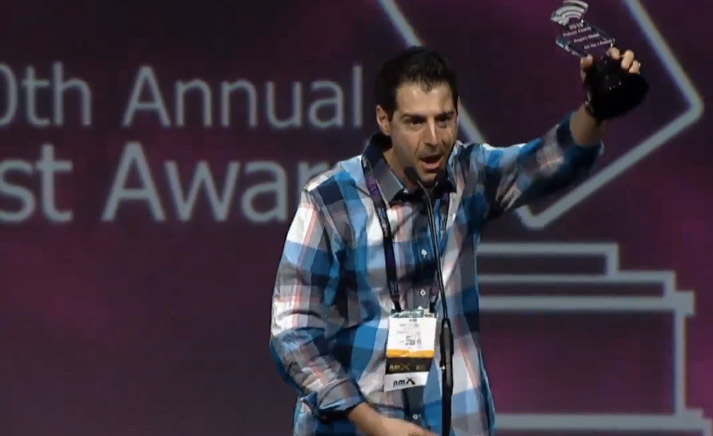 Two-time Survivor contestant Rob Cesternino’s podcast won twice at the Podcast Awards in Las Vegas last night. Rob Has a Podcast, or RHAP, was named best entertainment podcast and received the people’s choice award. In the latter category, it beat Serial, among other shows.

When he won the entertainment award, Rob thanked his contributors and family by name, and ended by saying “thanks so much to the community of Rob Has a Podcast–you guys did this.” After winning the people’s choice award, he said, “With the amount of people that are listening to all these shows, I’m not sure how a podcast like mine was able to do it. But I do believe what Seth Godin says: with a thousand true fans, or 10,000 true fans, that’s more important than millions of other people that maybe just care a little bit about your show.”

With these wins and just the podcast itself, Rob has absolutely demonstrated the power of his community. In January, I profiled Rob and the community his podcast has created, and they explore how he’s built such a strong and loyal audience so quickly:

Rob cut the awards down to the parts that matter: RHAP’s two wins. Watch: