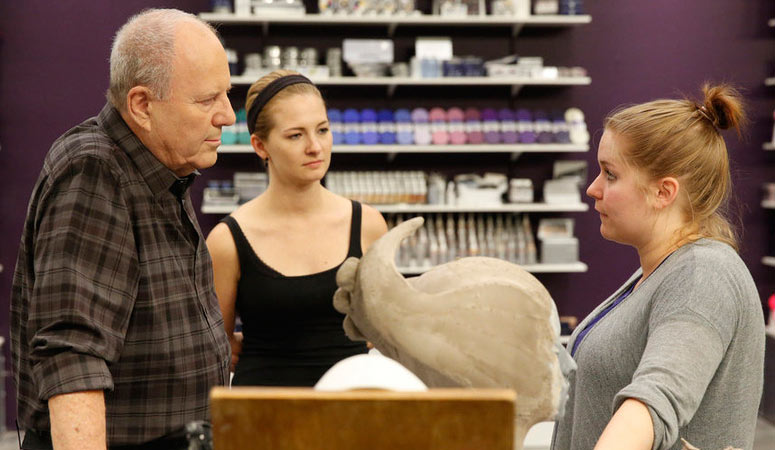 Face Off concludes its eighth season tonight after a strong season overall. That’s thanks to the challenges, the returning champion mentors, the contestants, and the work.

The challenges, some of which we’ve seen before, were interesting and often produced creative work: dolls come to life; steampunk characters from a western; creatures designed by children. I particularly loved the one where their inspiration was a sound effect.

The addition of mentors has made the show better mostly because they’ve helped their contestants improve, showing them techniques. They can’t actually do anything, but they can still give lots of assistance.

“It was almost like we were playing the part of Mr. Westmore,” Laura Tyler told me when I interviewed her last week. She said she was drawn to return to the show for a third time because “because I really wanted to teach; I really wanted to be able to tell other people what it was I learned on my season, and see if that kind of knowledge would help the contestants–to see if my knowledge of the game was valid.”

It certainly seems to have been, since two of the three finalists–Darla and Emily–are on her team. While the first person out was also on Laura’s team, the rest survived most of the competition.

Laura credits her fellow mentors with having different strengths: “Rayce is much better at conceptual design; I think that Anthony is much better than me at teamwork,” she said. Interestingly, she also said that, because of her particular strengths, she might have been more use to a couple of the contestants who were not on her team. “In retrospect, would I pick different players? Yes, maybe one or two, but only because I feel like I could have been more help to other contestants versus the ones that I had. But I’m really grateful and happy for the contestants that I did get. I wouldn’t trade any now,” she said, referring to that as only a hypothetical. She clearly thinks like a teacher.

Laura, who won season five and who now does makeup via her company Creature Works, told me that the mentors spent about 12 hours per challenge with the contestants, who get roughly 19 hours on each challenge. They were there the entire five hours of work time on reveal day, and of course, they were there on the reveal stage, which entails standing there for “hours on end,” Laura said. (I asked if the contestants can hear the judges whispering when they “take a closer look,” and she said no.)

Because the mentor twist didn’t significantly alter the game like it did on, say, Big Brother, I think it’d be a nice permanent addition to the show–bring back strong players, not necessarily winners, and let them help out. Michael Westmore’s advice is useful, but it’s also truncated and brief, both on TV and relative to the amount of time the mentors were able to spend with the contestants.

Some artists do better work when they have feedback and guidance from other artists, and that certainly seemed true this season. As unusual as it was to see a mentor sketch something or show a contestant how to fabricate something, it definitely improved the final products, most of which were pretty terrific this season.

I still want Face Off to be better, to evolve and to grow, but I’ve been hoping for this for a long time and nothing ever changes, except for McKenzie Westmore’s unpredictable dialogue. Seriously, though, if the show is going to be in a well-worn rut, at least it’s a rut that is still capable of producing surprising and interesting work.