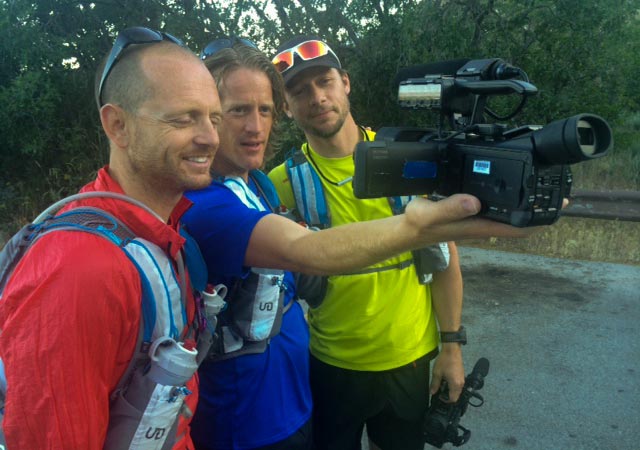 Blake, Matt Galland, and Danny, who film themselves on 100 Miles from Nowhere (Photo by Animal Planet)

Hi, I’m 100 Miles from Nowhere, Animal Planet’s most-promising series in years, since Whale Wars, and I’ve been ruined by terrible narration and too many disorienting close-ups.

Originally titles Matt on the Run, this new series follows three friends who take four-day, 100-mile run/hike/climbs in frequently dangerous places. They’re assisted by food and supply drops at the end of every leg, and have emergency support available, but otherwise they’re on their own. It’s a refreshingly authentic series for Animal Planet, on the opposite side of the spectrum from shows like that badly staged Tanked.

It is so underproduced that this is one of the many new series that allows their subjects film everything, which, yes, isn’t new. After one episode, I have mixed feelings about how effective that is here. Hand-held cameras mean an abundance of Blair Witch-style confessionals, at least when they’re not running with cameras attached to their bodies. Blair Witch did not make me throw up or anything. But on 100 Miles from Nowhere, so much motion and so many close-ups made me physically recoil from the screen: get out of my face, television program!

Occasionally helicopters capture establishing shots, but even those seem like they’ve been designed to also appear amateurish: fish-eye shots are equally challenging visuals. Throughout the first hour, even despite the addition of on-screen maps, I never had a clear sense of where they were or how one scene related to the next. It was just a jumble of tight shots.

And then there’s the narration. Two minutes in to the first episode, Matt says, in a voice-over,

“For me, the mountains are symbolic of women, just because they’re so beautiful. There’s no way a man could be a mountain out here. Men just climb them.”

I almost turned it off at that stupidity.

While the sexism dissipated, thankfully, the bad line readings did not. The narration is clearly written to sound conversational–“Have people died here? Uh, yeah. They have.”–but sounds stilted and written and acted, not authentic and real. The parts that are intended as information (“the heat slows you down. You’ve gotta keep your muscles cool.” “Dehydration can lead to cramps.”) come off as condescending.

Matt is actually quite funny in the moment, such as when he describes why the most gassy person takes the last position in line. “The only bad thing is when the wind switches, it blows straight up and everyone gets a taste of it in their mouth,” he says. “But hey, it’s called free calories–that’s how I call it. Inhaled calories.”

But his in-studio narration makes me long for the Whale Wars narrator, who I never really liked because he constantly interrupted the action. That after-the-fact control doesn’t make up for the chaos of the lack of production, and for me, actually hurt.

During a press conference for the series at the Television Critics Association press in January, I asked about the logistics of the helicopter shots, and Animal Planet’s Rick Holzman said this:

“This is all authentically self shot. We acknowledge that a helicopter has come in because, boy, it’s really nice to have that one establishing aerial. But the production guys are not there on a day to day basis. They pick up the SD cards and the batteries and give them new SD cards and batteries, and they are there for crisis support. But these guys are doing it.”