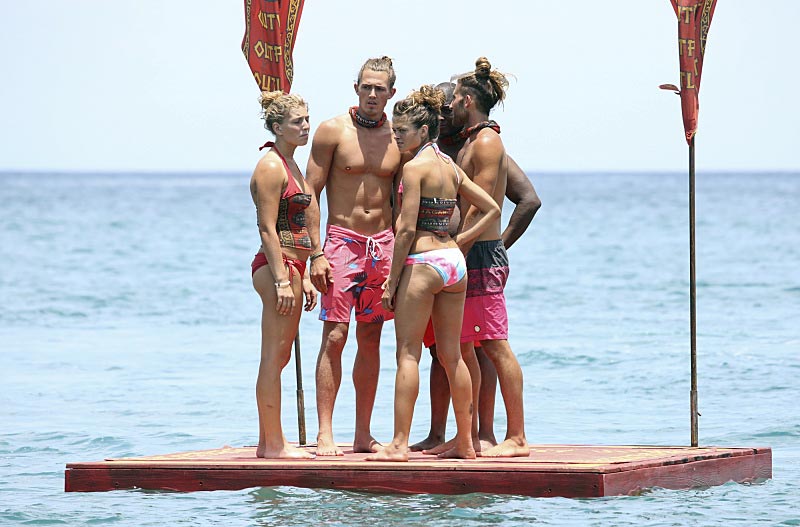 For an episode that had a lot of interpersonal conflict, a surprising blindside, and Jeff Probst yelling so loud he almost lost his voice (almost!), Survivor Worlds Apart was oddly sedate. That’s not criticism, just comment. It was quieter somehow, building story by focusing on characters instead of ramming story.

Early on especially, it’s not a great idea to stand out. Yet here we had people picking pointless fights left and right, pointlessly getting naked, and pointlessly ordering each other around.

First up was Max, who told us, “As a fan, student, and teacher of this game, I feel that it’s only right for me to tip my cap to some of the greats who’ve come before me.” Then he exposed himself, both in terms of his penis and his isolation from the other players, by wandering off naked to swim alone. Do you really want to be so obvious and alone so early? Or associate yourself with Hatch, whose most recent naked appearance in this game was a disaster? There’s also something annoying to me about the meta nature of this; by basically telling the audience that this is an homage, it’s more alienating than endearing. It’s just trying too hard.

But that’s nothing compared to the other tribes. On the blue collar tribe (if they have real names, the world will never know or care), Mike decided to order everyone around because they were too busy avoiding boredom by having fun with a makeshift basketball game. “I’m not trying to be a dick but, go get wood,” he said, being a dick. Why would he do that? It’s nonsensical.

Then there’s the no collar tribe, which just: sigh. Nina was convinced the mean girls hate her because she’s deaf, but really they hate her because she’s old. Seriously, whether or not those things are actually true, the worst part was that Nina gave them a perfectly legitimate reason to dislike her: she confronted them. “You guys have ignored me since day one,” she whined after Hali and Jenn went swimming naked without her.

Nina is just lucky that her tribe also included Vince, who’s similarly naive. Mad at Joe for being the center of attention and/or more attractive, Vince made himself the center of attention by demanding “acknowledgement and verification” from Joe, apparently hurt over something that happened last week. I’m not quite sure because when Vince talks, I momentarily fall asleep.

Seriously, what was going on with all this? Is this just fatigue and hunger setting in? Or is it just the irresistible urge of insecurity? Whatever it is, it’s fascinating, and I appreciated the opportunity to see some non-strategizing interaction. It felt very old-school Survivor.

The immunity challenge was a water challenge, reminding me how much I miss them from the Philippines. This was purely physical: swimming, climbing, weaving a ball on a rope through obstacles, and shooting baskets. The white collar tribe came from behind, and behind from its loss last week, to win. The no collars were mostly hurt by Will, who got tangled up but blamed later blamed it on a stereotype that Survivor has come back to over the years: “Water’s always been the black man’s Kryptonite.”

What was most interesting about the loss was how many options it opened up so early. While Nina seemed like the obvious target–and as the show went to break, I said that I thought she was finished–a lot of possibilities suddenly opened up. The three young things whose names I still don’t really know planned to split their vote, worried Nina had an idol. They enlisted Will to help out, but he didn’t want to get rid of Nina, who he’d befriended.

Meanwhile, Vince wanted to team up with Nina and Will to vote out one of the kids, which seemed like a distinct and incredible possibility for something like that to happen so early in the game. Then Nina mentions that Vince is worried about Will’s health. That, more than anything else, is what seemed to lead to Vince’s exit.

The end result was Will used his participation in the vote splitting to vote out Vince, even though the young things wanted Nina gone first. So everyone was surprised except for Will. #blindside indeed–and a strong second outing for Survivor Worlds Apart.