“Dare I say the best ep of the season?” That was Jeff Probst last week in EW, teasing this week’s Survivor Worlds Apart double feature. They were two strong episodes, the best so far this season, but if one or both of them represent the peak, I’m worried, because this wasn’t a very tall peak.

Four strong challenges–two reward challenges!–anchored episodes that each built on the character development from the first three episodes and led nicely to a tribe swap. The random switch left the perfect configuration on each tribe; this isn’t going to be one tribe decimating another quite yet. There’s an obvious swing vote from Sierra on the new blue tribe, and an obvious swing vote from Kelly on the red tribe, but also a bonus swing vote in disaffected Carolyn.

The first hour had an atypical commercial break mid-challenge, thanks to Kelly’s injury, with blood soaking her buff. Yet both that break and the pre-episode hype oversold it. A bloody cut requiring six stitches is no joke, nor is getting slammed in the head with a wood platform, but this ranks low in terms of medical intervention. Perhaps it was most notable for highlighting how Survivor medical personnel will do more than just minor first aid for people who remain in the game, and for the understandable yet odd way everyone remained blindfolded so the challenge wouldn’t have to be reset and replayed. 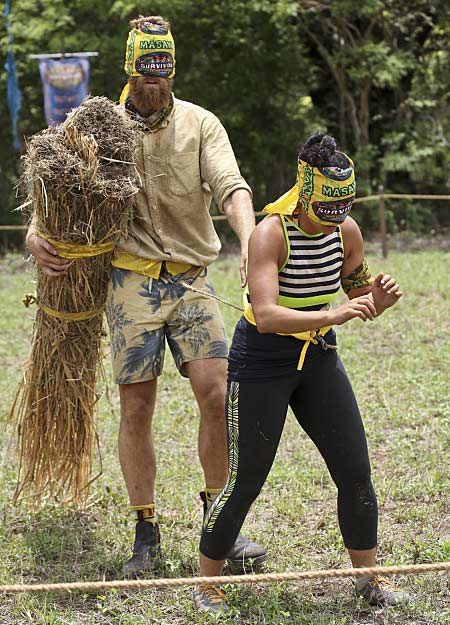 To link the episodes thematically, the story of the doubleheader was failed social games. First we had Lindsey clashing with Rodney over his sexist behavior and blather. Later it was Max and Shirin failing to recognize how much they annoyed not just their own tribe, but their brand-new, post-shuffle tribe.

Neither vote was out of left field, though I remain surprised that Max and Shirin’s new tribe voted him out instead of her.

A sexist Survivor gets rid of his critic

While it’s easy to understand Lindsey’s frustration and root for her as she went after Rodney, she did so at the expense of her game. The  vote, we learned quickly into episode two, was a three-way tie only because the rest of the tribe, minus Sierra, wanted to ensure one of them didn’t have an idol. They forced a tie, which is a novel approach but what had to happen in a six-person tribe.

For all the awful things Rodney kept saying, he did have some self-awfulness, both in terms of identifying its origin (his mother as role model) and its potential to affect his game. Rodney pointed out that he’s “a hothead” and he has to remember his three Cs, “cool, calm and collective [sic]”, though the Cs he was continually demonstrated were more like cocky, condescending, and chauvinist.

At tribal council he doubled down, “just statin’ facts” about how “nowadays girls don’t respect themselves” and “that women should hold themselves to a higher standard.” Why does this keep happening, world?

At that point, Jeff Probst called Rodney on his sexism, and you know when Jeff Probst calls you on your sexism, you’re in trouble. (That said, Probst did so in a subtly sexist way: by insisting millions of women had just been offended by what he said, as if it’s not possible for someone with a penis to be equally appalled.)

The Survivor teacher gets schooled

In episode two, Max exited the game with a classic blindside, one the editors began signaling after the challenge, when Max said the loss didn’t bother him and he was concealing his joy because “I’m really happy to go to Tribal Council and change the dynamic around my camp.”

But there was more. “It’s the blindisdes, it’s the doublecrossing–that’s really what I signed on for,” he said. And then at Tribal Council, apparently oblivious to the impending vote, Max pretended to produce an immunity idol by referencing this moment in Survivor history.

Max’s exit was followed by one of those terrific post-exit confessionals. He talked about his love for Survivor and said that his experience, including being blindsided, “deepened my appreciation for how difficult it is to play it.” He continued on those themes the next morning:

What’s interesting to me is how this kind of thoughtfulness and self-awareness weren’t present in the game the day before. To be so severely blindsided not just with a vote, but by people’s perception–that’s surprising.

The editing suggested Max and Shirin had no clue about Carolyn’s potential defection and her disgust with them. And to make such a bad impression so fast on their new tribemates: that’s remarkable, as was their simultaneous confidence. “I, honestly, am not worried,” Max said, again giving the editors the kind of thing they love.

That said, I am really curious why the tribe chose Max over Shirin. While they both over-signaled their intelligence and knowledge of the game to their tribemates, Shirin just seemed more annoying, at least according to the editing. Second, as a tribe that has less physicality, Max seemed among the stronger members. But he also might have seemed like a stronger strategic threat, whereas Shirin just seemed more manageable. And there was the whole thing of soaking his stingray-stabbed, wart-infested foot in their water pot.

Why Max and not Shirin is just one of many questions I have after that episode. Here are the rest: