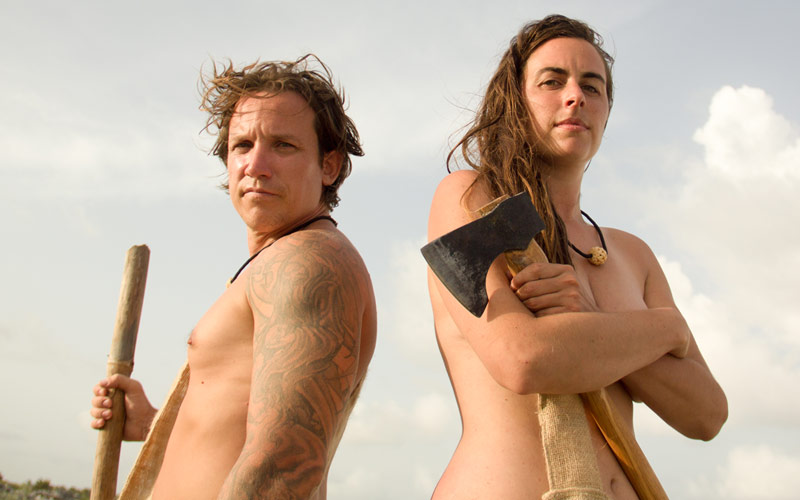 Luke and Alyssa on Naked and Afraid. (Photo by Discovery Channel)

Discovery’s hit reality TV series Naked and Afraid is spinning off a new series, while NBC has nearly simultaneously ordered a show, The Island, that sounds extremely similar.

When Discovery announced the fourth season of Naked and Afraid, which returns in April, its press release started with, “There have been many copycats, but nothing ever comes close to the original.” That’s quite true–I’m looking at you, Dating Naked–and now even Discovery is getting in the game of borrowing from its own success.

Naked and Afraid XL will take 12 former cast members, six women and six men, and strand them somewhere for 40 days versus the show’s typical 21. It will air this summer.

The network’s impressive new president, Rich Ross, who is working to undo most of the damage inflicted on the network’s brand by his predecessor, revealed the spin-off along with several other unscripted series. He told told THR, “There’s no game to win. This is about the power within yourself to survive and to help others recognize that in themselves.We’re not trying to rip people apart. We’re trying to build them up, and that to me is very Discovery.”

The other series also sound promising–and very vintage Discovery. They include a show about vintage cars in Cuba, Cuban Chrome; a competition between 30 engineering teams who ae trying to get a robot on the moon, Lunar XPrize; and Killing Fields, a forensic science show about places where bodies are buried.

Though NBC’s show doesn’t involve nudity, it is very similar to Naked and Afraid XL, and is clearly inspired by the success of the stripped-down survivalist show. NBC’s series also borrows from Les Stroud’s Survivorman, on which the survivalist filmed himself without a crew, producers, hotels, or wind machines.

Bear Grylls will executive produce The Island, a six-episode series which comes from the UK. It will abandon 14 clothed men on an island, adding only the twist of having them film themselves which, again, is not new. It’s not clear what on-camera role Bear Grylls will play, though he is NBC’s Curtis Stone, a personality the network inexplicably keeps using.

The format that comes from Channel 4 in the UK and NBC’s press release says “Bear Grylls gives the modern American man the ultimate challenge. Can a man of today’s world survive on a deserted island without the luxuries, or even the basics, of contemporary everyday life?”

Let’s see, what show might have already answered that question for three seasons now?