In another remarkable moment for HBO documentary series The Jinx, its subject, Robert Durst, has been arrested in connection with the murder of his friend Susan Berman in Los Angeles.

He was arrested Saturday at a Marriott in New Orleans, and The Times-Picayune reports that “The FBI Violent Crimes Task Force directed the arrest.” ABC 7 reports “he had registered under an alias and paid for the room in cash. Fake documents were found in his possession. The FBI believed he would flee.” 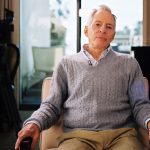 His arrest arrives, coincidentally enough, just one week after the series’ penultimate episode revealed a new piece of evidence, an envelope that matched handwriting and spelling on a note alerting police to Berman’s body.

The Los Angeles Times reports that “the working theory of the case is that Durst killed the writer, Susan Berman, because she knew information about his wife’s mysterious disappearance.” It cites a “law enforcement source … [who] said that information presented in the documentary proved key in the investigation.”

Is this, as some have suggested, part of “a deal the filmmakers made with cops”? Or does it mean police saw the new evidence last week along with viewers?

Either way, it’s another compelling chapter to add to this must-watch story.