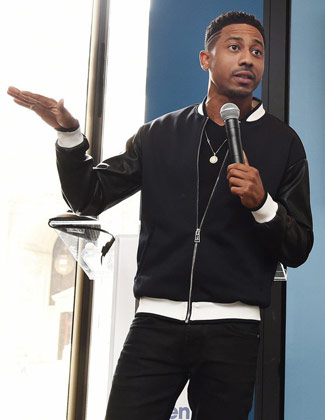 Esquire and Oxygen announced today that they’ll each air a reality series that’s connected to the other. Both shows follow the same group of comedians but from two different perspectives.

Esquire’s version, Comedians of L.A., will follow a group of comedians who tour and perform around the world. Oxygen’s version, Living with Funny, follows the comedians when they’re at home.

It’s also easy to imagine this as one show, where we see the comedians performing and then being with their families, like the way HBO’s Hard Knocks sometimes shows the players interacting with their families. But splitting the material into two series allows for more footage to be used, and for two different (overlapping) narratives–never mind potentially increased ratings for both networks.

Only one comedian has been named, Brandon T. Jackson, an actor who’s appeared in Tropic Thunder and both Percy Jackson movies. Here’s part of a 2012 web series that followed him:

Both shows, which have working titles right now, will be produced by L. Plummer Media, which also produces Preachers of Detroit and Mary Mary. In their press releases, Oxygen called this “[a]n unprecedented co-production” and Esquire called it “a groundbreaking, first-of-its-kind series produced in partnership with Oxygen.” Here are their descriptions of the two shows:

This companion docu-series showcases the personal lives behind the curtain of rising comedians in Hollywood and the women in their lives.  Cameras will follow the howling tale of what happens when they drop the mic and come home to their family, friends and significant others. Because when you are a comedian, the jokes don’t stop just because the show does. Brandon T. Jackson is the first comedian to commit to both series. Additional cast will be announced at later date.

In this first-of-its kind partnership with Oxygen, Esquire Network points an unflinching lens at the working life of a stand-up comedian onstage, backstage, and offstage. Comedians of L.A. (WT) follows rising comedians in Hollywood as they tour in concert halls worldwide and appear in blockbuster movies trying to take their careers to the next level. As they live and work in the same circles, the camaraderie and rivalries will surface as they all stand on the precipice of stardom, hustling to arrive. Oxygen’s series, Living with Funny (working title), focuses on their personal lives and relationships with their wives and girlfriends. The series will air during the same period on each network so fans can follow both shows seamlessly. Brandon T. Jackson is the first comedian to commit to both shows. Additional cast will be announced at a later date.