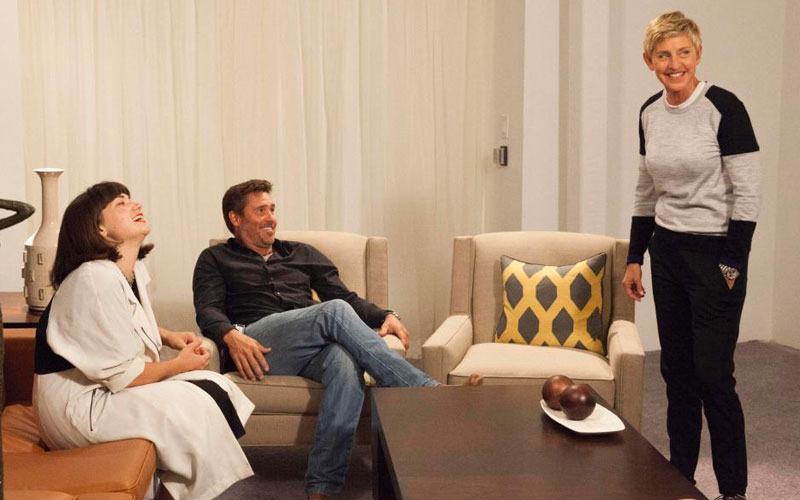 Ellen's Design Challenge's finale had an ending that included a disqualification for its winner.

Ellen’s Design Challenge, the HGTV furniture design competition show I’ve enjoyed, concluded its first season with a finale that crowned the runner-up the winner by disqualifying the winner.

Katie Stout beat Tim McClellan, but only because he was disqualified. Her “juxtaposition console” was interesting and used different materials, including purple wood, but the judges liked Tim’s hidden compartment table better.

Ellen DeGeneres didn’t show up until the last 15 minutes of her show, which was a smart idea. (There was a lot to like in this show, but it didn’t seem like a show that was really up to her standards.)

When she talked to Tim and Katie, though, she said, “Your pieces are insanely beautiful, creative–congratulations. This is a tough one.” There was no suggestion from the judges during their judging or their deliberation with Ellen that anything was amiss.

After a commercial and a repeat “the winner for the first-ever Ellen’s Design Challenge is…,” Ellen announced Tim as the winner. His family celebrated with him but then the footage cut to a “one week later” title card, and a segment narrated by the Kitchen Nightmares narrator:

“After the finale, it was discovered that there was an existing piece of furniture designed by European designer Simon Schacht, that resembled Tim’s. That led to the conclusion that Tim did not fulfill the requirement of the final challenge which was to create an original piece. Unfortunate for Tim, but good news for someone else.”

If you Google Simon Schacht, the images that come up are of a table that looks virtually identical to Tim’s, which was also shown on screen.

Earlier in the episode, the not-so-subtle editing cymbal crashed the foreshadowing when Tim talked to Chip, his carpenter, after learning the challenge. Tim said, “The real challenge with this, Chip, is to do something that’s signature, that’s that dynamic in that timeframe.” After Chip responded, Tim said something that lacked context but was rather critical:

“…and still looks like I designed it, not like it was designed by some–some designer in some other country, it needs to look like it came from me.”

It sounded like a confession, though again, it was clearly a sentence taken out of context, and if they had him on tape saying something about plagiarizing an idea, wouldn’t the producers have known earlier to disqualify him? When Tim introduced his piece, he described his inspiration like this:

“When that pile of lumber was sittin’ there, I said, ‘if we could transform that into a table, that made sense, that had purpose, that would work,” Tim said while introducing his table, which slid apart and opened up into “an extraordinary hiding place.”

Katie was surprised on Ellen’s set by Ellen with the news that she actually won: “Tim has been disqualified; you are the winner.”

After the finale, Tim tweeted, “What a most blessed and wonderful experience!” and thanked his carpenter and the show “for such an opportunity.” Separately, he congratulated Katie and said her win was “well deserved.”