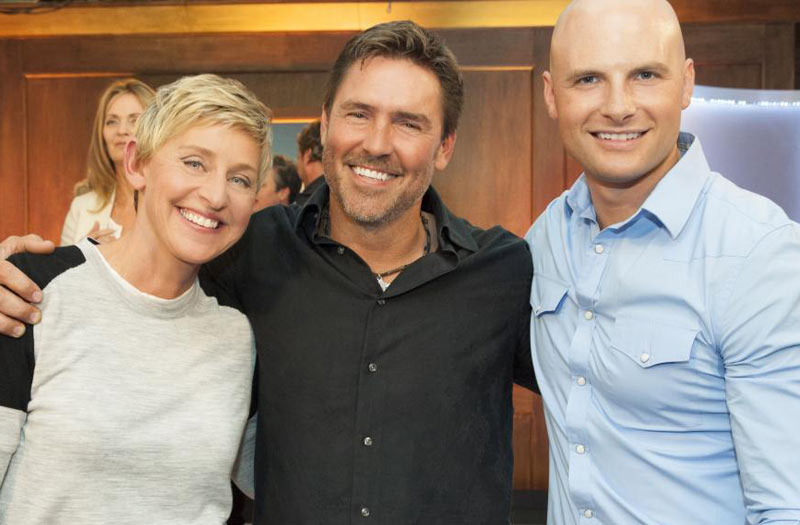 About halfway through her talk show today, Ellen DeGeneres had Tim McClellan, the disqualified winner of Ellen’s Design Challenge as a guest. He acknowledged runner-up Katie Stout, who became the HGTV show’s winner, as its “legitimate” winner, and admitted his piece had “similarities” to another designer’s work.

Ellen said “there was an anonymous tip” that led producers to Simon Schacht’s desk, which is incredibly similar in appearance to Tim’s final piece. “I know you as a person would not have purposefully done that,” she told him. She later said she wanted to work with Tim in the future because “everyone loved you, loved you as a person, your character, your talent.”

The segment was less an interview and more of a statement from Tim McClellan, and here’s what he said when asked to explain what happened:

“This whole experience has been extraordinarily exciting and rewarding for me overall–painful at times, for sure. How this could have happened? I–I have never heard Simon, I’m not sure of his last name–[Ellen gives him the name]–Schacht, and in my recollection, I have never seen his piece of furniture before. With that said, the similarities of the two pieces are quite compelling, and I understand the decision made and accept and recognize Katie as the legitimate winner of the show. Preparing for this competition, and over the last 20 years, I’ve looked at millions and millions of pieces of furniture, and uh, and it’s quite possible and looks as though that piece somehow got lodged in my memory. When Chip and I were deciding and working toward the design, and I saw that stack of lumber, I had a flash of a piece of furniture that would be brilliant for this show, and I owned it. And Chip and I built, built a fantastic, wonderful piece of furniture and it’s disappointing how this whole thing worked out and it’s been very taxing on me, of course.”

Neither he nor Ellen addressed the show’s use of a clip in which Tim told Chip, his carpenter, that his finished piece has to be one that “still looks like I designed it, not like it was designed by some–some designer in some other country, it needs to look like it came from me.” That lacked context, though, but in light of what happened, certainly seems damning.

Despite the outcome, Tim called Ellen’s Design Challenge “such a wonderful venue for designers and artists like myself to have a platform to express how we come up with these ideas, and how we execute them.”

The Ellen Show awkwardly teased Tim’s appearance, referring to Tim’s disqualification as “the most talked about moment in furniture design show history.”

Meanwhile, the designer, Schacht, told the Washington Post that he was contacted by producers who asked to use a photo of his work, but the Post’s Emily Yahr says he “didn’t seem to have a strong reaction” to Tim’s work or his disqualification.