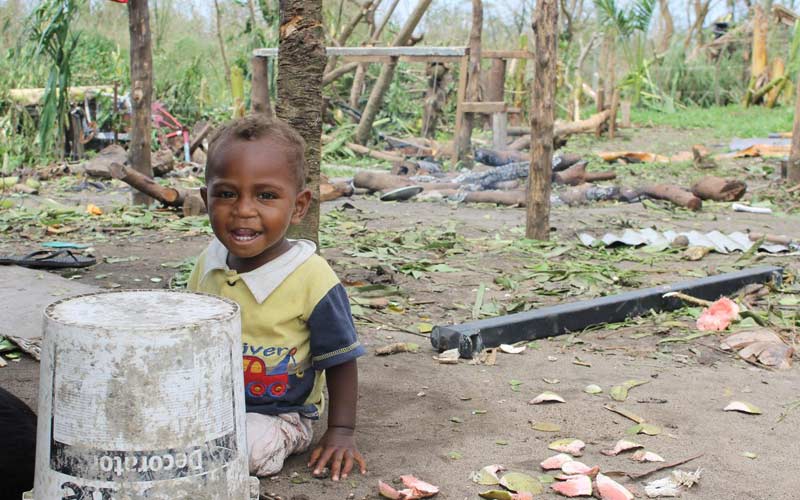 Creg, who's 1, in his devastated home of Taunono, which is outside of Port Vila. (Photo by Graham Crumb and copyright UNICEF)

A category five cyclone devastated Vanuatu over a 24-hour period earlier this month, and relief organizations have asked for help this week. Cyclone Pam hit the island nation March 13 with sustained winds of 155 mph, and it was one of the most-intense storms ever recorded in the Southern Hemisphere.

In Port Vila, 90 percent of the buildings were destroyed; that’s the capital city on the island of Efate, which is where Survvivor Vanuatu, the show’s ninth season, filmed in July and August 2004. Australia’s version of the show also filmed there, as did France’s Koh Lanta.

On March 14, Jeff Probst tweeted, “Everybody from the Survivor family is sending our love and prayers out to the beautiful citizens of Vanuatu.”

The United Nations Office for the Coordination of Humanitarian Affairs announced this week that $29.9 million is needed to help with relief efforts because “some 75,000 people are in need of shelter and 110,000 people do not have access to safe drinking water. Overall, an estimated 166,600 people have been affected by the cyclone — more than half the country’s population.”

UNICEF needs donations in part because “[a]round 82,000 children — about two thirds of the children in Vanuatu — are in need of humanitarian assistance.” It also noted that “80 percent of schools were damaged in Vanuatu and 34 schools were used as evacuation centres.”

Oxfam’s executive director in Australia told CNN that it was “worse than the worst-case scenario in Vanuatu. This is likely to be one of the worst disasters ever seen in the Pacific.”

Some of the most dramatic images of the damage were taken from an airplane and show how the cyclone basically stripped away all the trees from the islands: