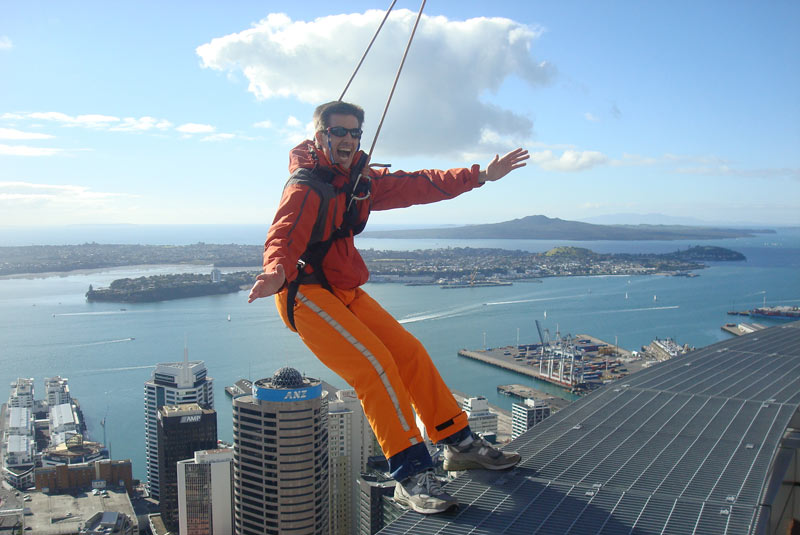 I lean over the edge of the SkyWalk platform on Auckland's Sky Tower in 2009.

I was just wondering if you have ever applied to any reality tv show? Would you like to be a contestant in any reality, or be the subject of a docu-reality series? Just curious! –Francisco

I’ve applied to one show: The Mole season two. That story in a minute.

As to the other questions, the answer is probably not. I’ll never say never; I like to say yes to new experiences and challenge myself to do things outside my comfort zone, which is very small.

The photo above is from my self-funded trip to cover Survivor Samoa in 2009. I extended my layover in Auckland so I could walk around and jump off the Sky Tower, which hosted an Amazing Race fast forward challenge the previous year. (I just watched a video of the SkyWalk on YouTube and had to dry off my hands before I could finish typing this.)

But I’m content doing things without the presence of cameras. Mostly, that’s because I have trust issues and I’m a control freak, and neither of those work well together with handing over your life to producers of a reality show. Even the most honest, ethical, and talented producers still will chop a life to bits to compress time and find narrative threads.

After that, the viewing public gets to consume and chew apart that constructed character. I’d rather be writing this with my legs dangling over the edge of the Sky Walk platform, and heights terrify me.

Auditioning for The Mole, season two

So back to the first part. In 2001, although I had the same concerns, I tried out for season two of The Mole.

I actually wrote about the experience for The Chicago Tribune 14 years ago, but what I didn’t say in that account is what I’ve realized since then: I WAS TERRIBLE.

I did exactly the opposite of what one should do in a casting interview. I gave flimsy answers. I revealed nothing of myself. I came off as the introvert I am, not an introvert who would make good television. My answers were flimsy. 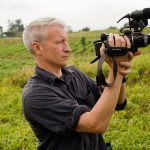 Anderson Cooper on The Mole and its future

For some reason, in my head, I remember saying that I wanted to be on the show to hang out with Anderson Cooper in Europe. That may, however, just be what I secretly wanted and/or joked to people afterwards. Reading my account of my actual answers in the Chicago Tribune is embarrassing:

Then two important-looking men came through a door. One sat down in front of me. I wanted to introduce myself, shake his hand, but he didn’t have time for that. He told me quickly that this would be fast, and then apologized for the wait.

“Oh, no problem,” I said, trying desperately to be myself.

Flipping through my 10-page application rapidly, like you’d flip through a phone book to get to the right section, and with the detailed interest of an auditing IRS agent, he asked me questions.

“Well, um, after I graduated from college two years ago, I wasn’t really ready for the 9-to-5 thing. I really want to do something that challenges me — mentally, physically and as much as possible.”

He asked me what I did for a living. I told him, mentioning that I was also a writer. He asked what kind of things I liked to write about, and definitely avoiding the obvious answer (“experiences like this one”), I told him.

I feel bad for that guy, having to listen to people like me all day. I was not memorable.

What would I say now, if I had to do it again? It’s easy to type something rather than to say it in the moment, but I imagine something like this–simple, over-confident, ego-filled–would be better:

I’m an excellent liar. I lied to myself for 20 years. If you can find someone else who spent more time practicing for a game that involves so much deceit, cast them. Otherwise, you should make me the mole, because if you don’t, I’m going to figure out who it is and win this game that I love.

Thanks for the terrific question! If you have a question about reality TV, please send it!