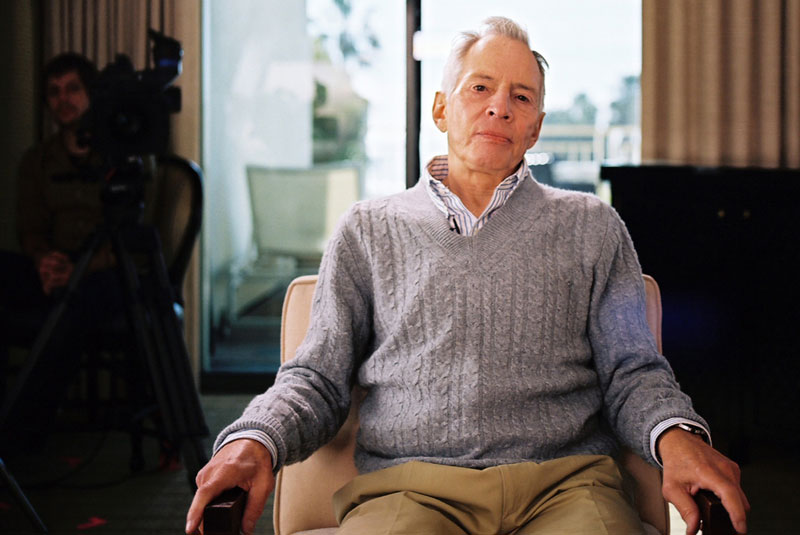 Robert Durst in Andrew Jarecki's series The Life and Deaths of Robert Durst. (Photo by HBO)

An envelope and one word: together they produced more drama than any other reality TV series has delivered so far this year. The person who discovered the envelope was crying and shaking, and as soon as we saw it on screen, that response was perfectly understandable. The man discovered the envelope in his mother’s belongings; she was murdered in 2000. After her death, a note was sent to Beverly Hills police tipping them off to her “cadaver” at her address. The discovered envelope was from on the letterhead of his mother’s friend Robert Durst, and the handwriting was identical to the note sent to the police, as was the misspelling of “Beverley Hills.” Identical.

I’m talking here about HBO’s extraordinary documentary series The Jinx: The Life and Deaths of Robert Durst. If you have yet to watch it, and you have access to HBO, go watch immediately. Because you are missing extraordinary unscripted television, and beyond that, a compelling, unpredictable story.

Despite the comparisons that preceded its debut, this is not Serial, and not just because the envelope is a near-literal smoking gun that points to the kind of unambiguous conclusion that The Jinx‘s creators have promised.

Until episode five, director Andrew Jarecki–an executive producer of Catfish (the documentary film and TV show) and director of the incredible Capturing the Friedmans–was not much of a character in his own series, nor was his process the focus.

Instead, the story unspooled in big chapters that laid the groundwork for this final confrontation. Its elements are varied: archival footage, interviews with those involved, photographs, and location b-roll, like a resplendent overhead shot from a helicopter of the pine flats in New Jersey.

Along the way, the series dips into the sit-down interview with Robert Durst, allowing him to address and comment on–for the first time–the events that we’ve learned about. He’s such a compelling character, and one who the series humanizes without glamorizing him. Just watch him:

It’s easy to see why his story is so interesting, and why having him talk about it for the first time is such a coup. Throughout The Jinx, however, there is considerable time spent with others, including the loved ones of the dead, which doesn’t exactly solve the problem of giving attention to the alleged murderer instead of the victims, but the series is definitively not Robert Durst’s perspective about these events.

The series also occasionally uses reenactments, including in the clip above. Those are well-cast, artfully shot, and just look terrific in a way reenactments usually do not. But they also have a heavier editorial hand than other elements. Sometimes, when real places or things are recreated, such as Durst’s apartment in Texas where he dismembered his neighbor, it’s not always clear what we’re looking at: is that real evidence or recreated evidence? Other times, the reenactments illustrate something that hasn’t yet been established as clear fact. For me, those things unnecessarily undercut the series’ authority.

But aesthetically it’s flawless, and the reporting is robust. The conclusion of episode one introduces the weirdness of Durst contacting Jarecki after seeing Jarecki’s film, All Good Things, a fictionalized account of his wife’s disappearance/murder. But the conceit of having he filmmaker in his film mostly falls away for three more episodes, and Jarecki was not Sarah Koenig–at least not until episode five.

The story gets weird

Laying out all the research and groundwork before getting to the revelations and removing the fourth wall is an interesting and smart choice, I think. It doesn’t create as much investment upfront, but instead builds that over time.

Episode four concluded with a break in the formal interview during which Robert Durst, apparently left alone, repeatedly mumbled under his breath, “I did not knowingly, purposefully lie.” It felt like both a rehearsal and an attempt to convince himself, until his lawyer barged into the frame to tell him, “your mic is hot.” Until that point, Durst wasn’t exactly sympathetic, but it was like a pre-holy shit moment, signaling that there were more surprises ahead.

The tone throughout The Jinx has been one of somber mystery, but everything changed in episode five. There’s an almost comic interlude with Robert Durst and the film crew being awkwardly followed around New York City by his brother’s bumbling security. One uniformed security person denies that the D on his jacket stands for “Durst”; another tries to look inconspicuous by covering his face with a newspaper and ducking while walking down a sidewalk.

Since there is focus on Andrew Jarecki’s investigation, the fourth wall comes down; in one scene, Jarecki confronts Robert’s brother Douglas Durst, who runs the company that now runs the Freedom Tower in New York City. After that, Jarecki walks down the street and introduces us to his thoughts. “It must be strange for Bob to not exist,” he says, adding that “it gives you an idea about why Bob wants to be in our film.”

Then there’s the high tension of the envelope, which is the series’ first major revelation, and The Jinx knows it. The episode builds up to the reveal, with voicemails from Susan Berman’s son, Sareb Kaufman, and his nervousness creating significant tension about just what exactly he has discovered. We see producer Marc Smerling and basically follow as the story unfolds for the filmmakers. There’s lots of of time lingering on the envelope, and we see Jarecki locking it into a safe deposit box.

Again, it’s considerable contrast from the controlled storytelling in the first four episodes, but it works, because holy shit. Earlier in the series, Robert Durst talks about what was sent to police, and calls it “a note to the police that only the killer could have written.” The preview for the finale suggests that the fourth wall is gone completely now, as we see Jarecki meticulously planning just how exactly they’ll confront Durst with this evidence.

That promises to be an epic conclusion to a true story, a story that The Jinx: The Life and Deaths of Robert Durst tells exceptionally well.