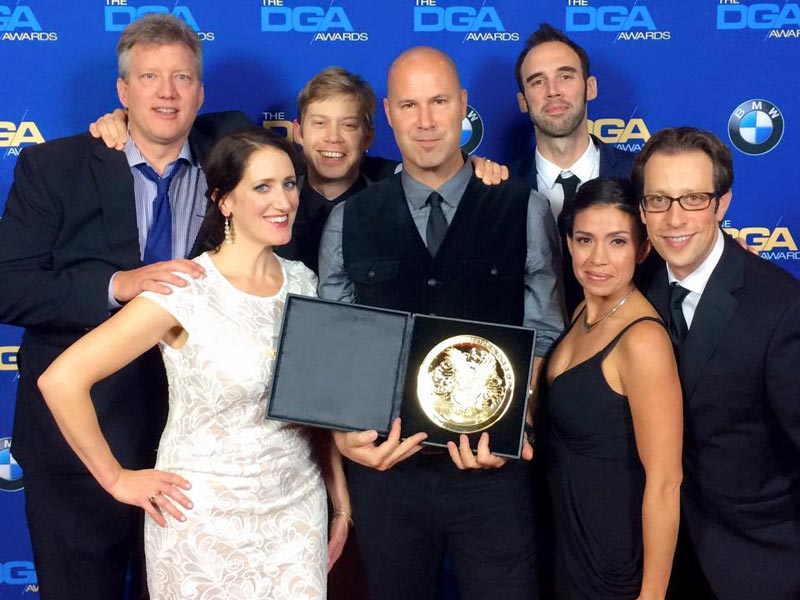 Anthony B. Sacco, the director of Starz’s The Chair, has won the Directors Guild Award for outstanding directorial achievement in reality programs. It’s his second win; he previously won for NBC’s Treasure Hunters in 2006, and in was nominated for an episode of Project Runway‘s fourth season in 2007.

Sacco won for the ninth episode, which focuses on Anna Martemucci and Shane Dawson editing their films. As I wrote in my review of The Chair, the series was beautifully directed and edited, and is a really impressive work of art by itself. If you have yet to watch it, it’s on Amazon, iTunes, and other digital media. Next week, the entire TV series and both films will be released on DVD.

In this video, Sacco describes going “old school reality” for the show, “telling stories through our lenses.” He called it “a tough journey” in part because “we started shooting with no money” and it was “88 days straight of no sleeping,” never mind that his wife had twins during production. He also describes its visual style, created in part to avoid Project Greenlight comparisons. He worked on that show, and others including Whodunnit? and Project Runway.

The other reality TV nominees for the DGA award were Bertram van Munster, Jack Cannon, and Elise Doganieri for The Quest (“One True Hero”); Neil P. DeGroot for The Biggest Loser (episode 1613), Adam Vetri for Steve Austin’s Broken Skull Challenge (“Welcome to the Gun Show”); and Steve Hryniewicz for Top Chef (“The First Thanksgiving”).

The award for directing a reality program has been presented 10 times now. Previous DGA reality award winners are a diverse mix, as are the nominees: