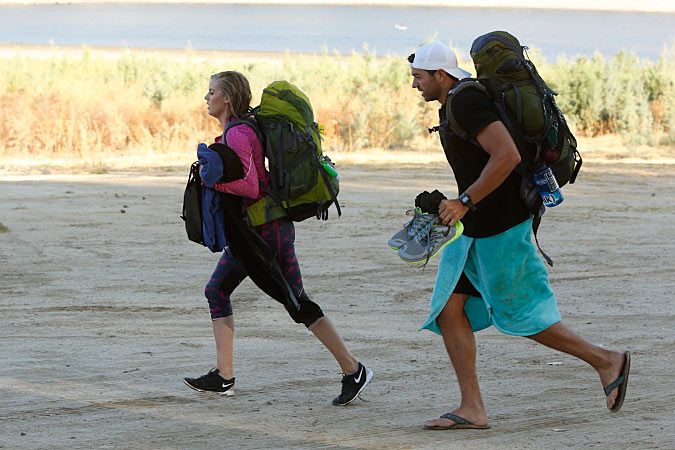 Amazing Race 26 couple Laura Pierson and Tyler Adams were both recruited in Santa Monica, despite previous attempts to get on the show. (Photo by Monty Brinton/CBS)

On Hallmark’s Home & Family, four of the “blind date” contestants for The Amazing Race 26 talked about how they were cast, and two of them who were eventually paired together had an interesting story: they were both recruited in Santa Monica, California.

Their stories sounded quite familiar to me, and I started remembering things like:

And I also recalled that these two recruits-turned-winners are from Santa Monica:

I’m sure there are many more. And yes, there’s no surprise that if you hang out anywhere Lynne Spillman or her casting directors go, and you’re a hot young thing, you’ll probably end up on a CBS reality show.

But here’s the really interesting part: One of The Amazing Race contestants is a producer on Home & Family. As she says in the clip below, Laura Pierson did the following:

So yes, Laura seems to have made it all the way to casting finals, yet she actually ended up on the show because she was in Santa Monica.

BUT IT GETS BETTER. Laura’s blind date teammate, Tyler Adams, said on Home & Family that he:

So, the lesson is clear: Stop making videos and harassing Jeff Probst or Phil Keoghan on Twitter and just move to Santa Monica.

Just to be clear: I understand that sometimes people aren’t right for a certain season’s mix of characters but might be right later. There are many, many contestants who have been almost cast one season and then cast on a future season. But what’s remarkable in Laura and Tyler’s stories is that they were both familiar to casting producers, but being in Santa Monica is what made the difference.