Tomorrow on newsstands is a $10 special issue of CBS Watch! Magazine that’s all about Survivor, on the occasion of the Survivor 30th anniversary. Survivor 30 Seasons contains a brief oral history of the show’s genesis, lots of photos, a season-by-season rundown written by Jeff Probst, and interviews with people including casting director Lynne Spillman and challenge producer John Kirhoffer. 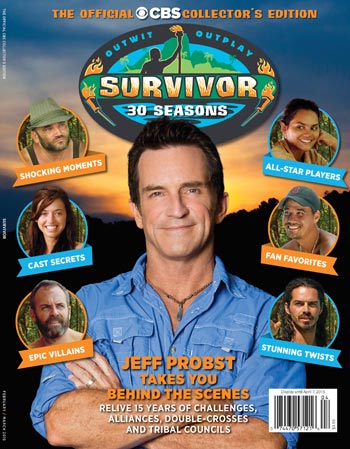 It also contains the results of the fan polls, and those are, predictably, the most annoying part. The poll about the series’ most memorable in Survivor history gives that to Russell Hantz’s hat being burned. The runner-up is Ozzy being blindsided; Richard Hatch winning season one comes in at number five.

Rob Mariano comes in first among the “most beloved, feared, and respected characters,” followed by Russell Hantz (sigh), Rob Cesternino, Parvati Shallow, and Ozzy Lusth. The “steamiest castaways” are the most innocuous, finding Malcolm Freberg and his happy trail to be the steamiest man and Brenda Lowe to be the steamiest woman.

The worst poll, though, is the best season poll. The winner: Heroes vs. Villains, followed by Pearl Islands, Micronesia, Australia, Cagayan, All-Stars, and then Borneo. Amazon, China, and Cook Islands round out the top 10. Sorry, season one always wins, always. More of my ranting on the season rankings.

That waste of space aside, it really is a nice magazine (buy it online) with a lot of great content. There’s an interview with two Dream Team members who are now on the crew, Jordan Ferrer and Riley Munday, and great photography, including behind-the-scenes photos of platforms built in the water for the camera crews for a Survivor San Juan Del Sur water challenge and an arial photo of a Survivor Caramoan challenge that shows not just boats, but the challenge beach’s proximity to more inhabited areas.

A lot of what Probst writes is summary of history, like Guatemala being the first season with immunity idols and returnees, but he also offers some insight, not all of which is brand-new but is still fascinating. Here are some highlights from the magazine: