After Kenya Moore was fired on last week’s The Celebrity Apprentice, someone on Twitter told her she “didn’t deserve to go home.” Kenya replied:

“I know but it was planned that way.”

This sounds like typical post-exit complaining, but it echoes a conversation I’d had recently. Is it possible that the eliminations are planned, rather than just the product of Donald Trump’s erratic decision-making?

I know, you’re thinking probably thinking, Of course they are, you moron. All reality TV is fake! Just look at the evidence, such as Trump picking Joan Rivers over Annie Duke, who raised more money. Ditto Arsenio Hall over Clay Aiken, which generated a conspiracy theory. Or  Trump firing most of the cast last week, which certainly did not feel organic–it seemed like a way to get closer to the final two that he wanted. (I’ve asked NBC about that, and the scheduling of the show, but have yet to receive a response.)

Or maybe you’re on the opposite end of the false dichotomy, thinking, Donald Trump is full of integrity, which he reminds us about all the time! He definitely does remind us of that. In fact, just last month, he said this at the winter Television Critics Association press tour last month (the emphasis is mine):

“I don’t let anything influence my decision. I do it on the merit. And I really don’t think we’d be sitting here right now—we would have ended this years ago—if anything really influenced me that wasn’t right. […] I’ve had many times where I really fired the best entertainment. Okay? And I fire the best entertainment, keeping somebody who’s not as good for entertainment, but deserves it. And it’s really called credibility. If I lose credibility, the show would not do very well.“ 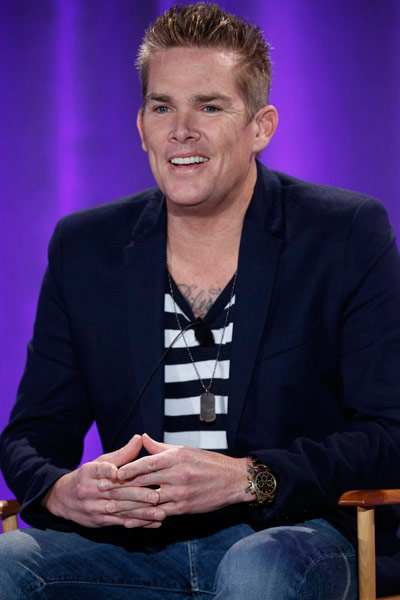 I’m not sure a discussion of Trump’s credibility is even possible. It’s hard to call the firings staged or fake on a show where the entire premise is that one person gets to make unilateral decisions, however irrational they may be. What I do know is that the following is another piece of evidence that the outcome on the NBC series are more complicated than they appear on television. (Yes, I can hear the duh.)

Mark McGrath was on The Celebrity Apprentice‘s fourth season and exited after essentially losing a boardroom face-off to Gary Busey following a task that involved creating a display for Australian Gold. Last summer, McGrath was one of the stars of Sharknado 2, and he’s also in the forthcoming sequel to Joe Dirt, which will be released on Crackle this summer, and which he was promoting in L.A. (More on that in a future story.)

Talking about his forays into film, he told me, “Reality TV might be scripted as well sometimes–I’m not saying they all are, but there’s moments you want to hit as opposed to dialogue you have to hit.”

I asked which of his reality show experiences was the most authentic and real, he said immediately, “Celebrity Apprentice, by far. I don’t think there’s a person that will tell you differently that hasn’t done it. They’re 16 hour days and you’re working every day.”

“That show works because you’re tired,” McGrath said. “You get a Meat Loaf/Gary Busey fight because people are at their breaking points. They’re very smart over there–that’s a Mark Burnett production, they know how to make reality TV. It’s a competition but it’s a reality show first. That beat me up and it’s brutal. You’re doing these Herculean tasks that would take weeks; you are really are rolling up your sleeves getting these things done.”

“You see people limping to the finish line there. I was really shocked at how physically, emotionally, and mentally exhausted I was. But you can see it in the breakdowns people have; you can’t fabricate those. Meat Loaf is one of the nicest human beings you’ll ever meet in your life, and to see him go off on Gary Busey like he did–it was mindblowing, it truly was,” he said.

“I have the distinction of losing to Gary Busey in a battle of wits in the boardroom,” he laughed. “That was something I’ll be carrying away from me forever. Like I said, there is a competition element to the show, and there is a reality part to the show.”

By reality part, he did not mean authentic and credible, alas. Instead, he was referring to the more constructed, artificial nature of the competition.

Mark McGrath told me, “I remember my team, John Rich and Meat Loaf and Lil Jon were going, ‘Mr. Trump, if you bring Gary back, we’re not going to work with him. We’re going to boycot.’ And I go, ‘You guys are killing me–you’re putting a nail in my coffin.’ That’s why I didn’t bring anybody back.”

Trump keeping Gary Busey around for entertainment is something Trump actively denies doing, but it’s not all that unreasonable to imagine that happens. Again, the whole conceit of the show is that Trump gets to do whatever he wants, and if that means firing boring people, well, bye-bye boredom.

But it’s what McGrath said next that was surprising, to say the least.

“I knew my fate was sealed, because we’d won five in a row, and our project was clearly better than the ladies’. I’m going to bore your readers and your listeners now, but they had to keep the ladies’ team together. And blah blah blah, I was a little bit of a sacrificial lamb on that one.”

Bore my readers! Not a chance. Basically, he’s saying that both the challenge outcome (“they had to keep the ladies’ team together”) and his exit (“I was a little bit of a sacrificial lamb”) were decisions not actually connected to merit.

A side note: I didn’t remember at the time, but when I went to check, learned that, when Mark was fired, the women’s team had a three-challenge losing streak broken in the episode before the one where he was project manager. In that previous episode, Jose Canseco quit and Richard Hatch was fired. So I’m not quite sure what he meant by “five in a row,” but had the women’s team lost that episode, they would have lost four of the past five challenges.

In any case, McGrath’s story seems a lot more credible than Trump’s claim that “I don’t let anything influence my decision.”

So many sacrificial lambs

McGrath said that, although his band and friends remind him “all the time” that he “did lose to Gary Busey in a battle of wits,” “I did get to come for the finale; I ended up designing John Rich’s can that won, and came up with the concept for the video, and I did sort of redeem myself at the end. And I like to tell people that–remind them.”

When I asked about the show’s effect on his charity and career, McGrath told me, “When you’re on a major primetime network show, it’s gonna raise your profile. People go on there for that; let’s be honest. It’s nice to have your charity as well. I think what it did for me is it really kind of solidified my bond with the Save the Music campaign which was great, and I got to win a little money as well for that. … If it doesn’t raise your profile, you did something wrong, or you were out early.”

He added, “I think I handled myself well on that; I didn’t really embarass me or my family. So I think that’s the good part; probably would have lasted a little longer if I was an asshole, you know?”

Yes. After watching this season, on which so many lower-profile cast members have basically quit or just given up, it seems like the non-assholes are resigned to their fates, however they are determined.