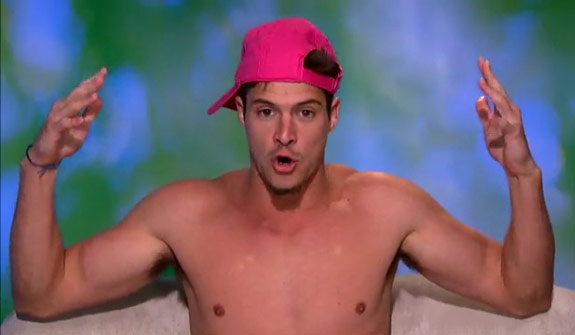 Big Brother 16 cast member Zach Rance talked to Mashable about being cast for BB16 and about life following the show, and his admirable, vulnerable honesty reveals a devastating truth: “I don’t know what to do.”

His discussion of how he was cast is interesting, but it’s what comes later–literally, what happens after the show, when cast members are basically dumped onto the street after three months of fame they are completely disconnected from. Zach says:

“I did not prep myself for life after the show. I was not ready at all. I get off the show and people are telling me, ‘You’re a legend,’ and I’m like what? I’m a legend? I’m an idiot.”

How could anyone know what that’s like, to have literally every word and action be scrutinized for months by millions of people? Zach continually repeats that he wasn’t ready, and that’s probably an understatement. Discussing his new flood of social media followers and advice he was given, he says:

“People keep telling me what I need to do, and I don’t know what to do. I just graduated college. I have an economics degree … I know about exchange rates.”

He is not naive–the last sentence of the interview is him asking if the reporter will include his handle in the story, and, of course, he gave out his handle on the live show–but it’s hard not to believe him when he says:

“I didn’t know what to do. It would be different if I saw a gradual increase in followers, if I saw the fame grow. But I didn’t see that.”

Zach admits, “I’m trying to make as many people as possible laugh,” but realizes the potential problem with that strategy, because it’s so hard to keep so many people happy. And then things get really melancholy.

“But I can’t stray away from myself, and I can’t care what people think. I potentially have a career, and I want to steal Ryan Seacrest’s job. I don’t know the steps to take, but I’m working on it.

Life after reality TV is … I don’t even know what to say. People call me a social media mogul, but I’m not. I’m just a TV personality, but I don’t know. The show gives you so much exposure. I don’t want to sell just merchandise. I want to do something. I became popular because of my personality, not because I’m a good singer or good looking, but because of who I am. I don’t know what I want to do.”

The really sad thing is: this cannot be an atypical experience. Zach Rance is not alone here, and his honesty should not be ignored, dismissed, or mocked. And television shows, networks, and producers just don’t prepare their cast members for what it’s like to deal with the repercussions of what they’ve done–what the cast members have done, and what the show has done to them.

They cannot help someone find direction, of course. But they can help them deal with the fame, and warn them about the opportunists lurking behind friend requests and text messages. Some shows make a therapist available afterwards; actually, all shows should do that, even mandate counseling (and not from the on-set psychologist, but from someone objective and removed. But they should also make a social media expert available, too.

Cast members are already woefully under-compensated despite their vital contributions, and the very least that can be done for them is to give them the tools they need.