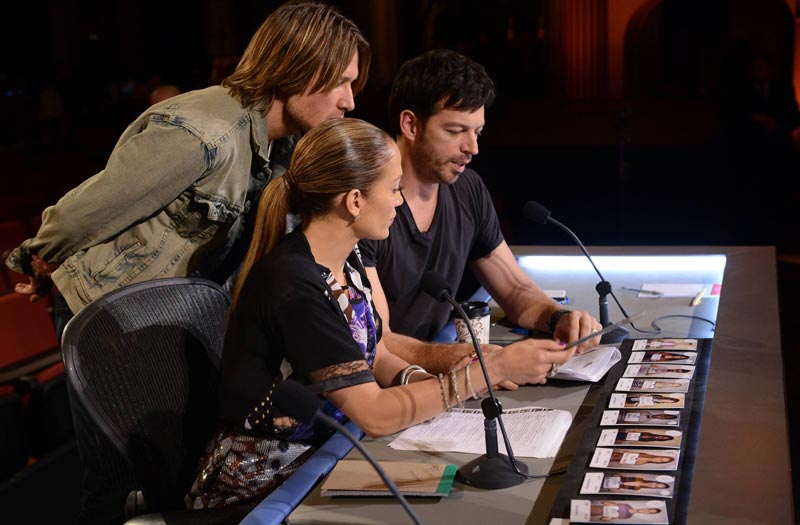 There are more pictures on the American Idol judges' table than there were performances last night. (Photo by Michael Becker/FOX)

Hollywood Week is always my favorite part of American Idol, in part because it deviates the most from the singing-on-a-stage format and resembles non-competition reality TV shows. I always wanted to see more of their off-stage lives, but after flirting with mansion footage, the show stuck to its studio roots.

Hollywood Week is the one incongruous part, and it’s often terrific. There’s stress and tension about cuts that can come at any time. Everyone gets a sense of their competition. Conflict arises when the contestants, sleep-deprived and stressed, are forced to work together for their group performances.

This year, there are four Idol Hollywood Week episodes, including two for the new “showcase” round, which will have the remaining contestants perform for a live audience at the House of Blues. Those episodes will air next week, and the group performances will be compressed into one hour Thursday night.

So what did we get Wednesday night? A gigantic waste of time. I mean, if you like good singing, you got a lot of that. If you like manipulation, you also won because the reason for all of that singing was concealed from the contestants, but not from us, so we got to laugh at their nerves. Ha! Silly teenagers and 20-somethings, worried for nothing.

But if you’re me and love American Idol Hollywood Week for what it usually delivers, you got screwed. Just look at how the episode played out– there were only 6.3 performances that mattered!

How many minutes of feedback-less singing there was
37 minutes

How long they took to reveal that this had been bullshit, and that all “the most memorable” were going through to the next round
37 minutes

How many people sung then
3

How long it took to start crushing dreams
48 minutes

When the montage of dream-crushing started
49 minutes

How many people performed then
1

When more singing started after that
56 minutes

How many people performed then
2

How many performances there were then
one-third of a performance, because it was cut to be a cliffhanger