Syfy’s Wizard Wars returned last night, and while it’s still a fun show with impressive magic, season two did not get more transparent about the show’s rules. How does the competition work? How much time do the magicians get to create magic and practice it? Why don’t the judges get more specific in their critiques about flashes or other things they see? 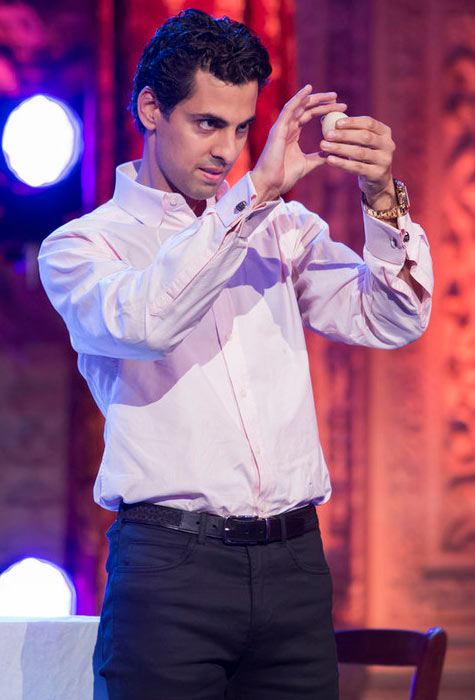 I spoke with series judges Penn and Teller, and one of the show’s wizards, Shimshi, to find out the answers.

1. Episodes film back to back

All six episodes are filmed over three days, so it’s back-to-back magic performances.

Teller said, “It’s a very luxurious show for us because we get to watch other people work.”

That’s not true for the wizards, who sometimes have to both perform and prep tricks during the same timeframe. Shimshi said that might mean “we’re busy the first two days; we don’t have time to create the third” act because they’re performing. An act, he said, “could take hours; it could take days” to prep.

2. How much time the teams get varies

There is no definitive answer here, which may be the best reason why it is not addressed on television.

Each team of magicians, whether wizards or challengers, was given information about the props beforehand, and then given a set amount of time to actually produce and rehearse the act. So, they can think about it before showing up to create it.

Penn told me that the amount of “time changed all the time. And also they would get information ahead of time about what the props were going to be so they had some time to think about it.” He added, “The amount of time doesn’t matter, and it was also never agreed on. The only thing that really matters is that both teams have all the same information and the same amount of time, so it’s a level playing field.”

Shimshi said, “We have at least a day or two to get our stuff together.” But he confirmed that producers “make sure that everybody gets the same amount of time. Sometimes they don’t decide on the items until the last four days, and you can also create stuff in your mind but until you get the object in your hand … when you get there on set, which is a few days before the show, you don’t know what to do.”

3. The magicians don’t think the exact amount of time matters

Why not disclose all this to the audience? The show makes it seem like the tricks are created between act breaks, in maybe an hour or two. Penn said “that’s so unimportant. The tricks that we do are one to six years, that we work on, for a trick to go in our show. So whether you’re talking about one hour or whether you’re talking about three days, it’s still not the timeframe magicians work in. It’s still improvisation.”

Shimshi agreed, “It really is kind of irrelevant.” He said it takes weeks or months before he’ll show his family a trick, and then he’ll practice with others. He said it takes two years after it’s performed for paying audiences to get a trick TV-ready “so I’m breaking all the rules by doing this–not only that I’m being judged, and I’m the wizard, and the pressure’s on you.”

4. The wizards no longer decide who will perform

The most substantive change between season one and two is that producers now pair off and choose the wizards who will face the challengers.

Even though they weren’t choosing who among them would perform together, Teller said the wizards got better: “They settled in with each other, and all of their performances, I thought, were just way better on the second season. It was good on the first season; second season, they were comfortable, they were at home,” he said.

Shimshi told me that it’s somewhat awkward being in the wizard position, in part because of the aggrandizing thrones the wizards sit in (though he admitted “they are comfortable chairs”). He finds himself rooting for the challengers, and, he said, “I don’t like myself when I walk out there.”

The biggest challenge is casting. Penn said, “The format was pretty much nailed; it’s all a question of who they get on, a question of casting. The show is only as good as the magicians.” It’s much more possible to cast a show like this now than it was 20 years ago, however: “With YouTube and the Internet, people are popping up all over.”

5. The magicians get help

Also not disclosed on camera is that the magicians get assistance. “We have help,” Shimshi told me. “The wizards and the challengers both have help. We have magic consultants, we have builders. We build a lot of stuff ourselves but we get help from them if we need to do certain things.”

As to Wizard Wars‘ conceit of having the magicians use random objects, Shimshi said, “We get to use new things and push the envelope.”

6. There are unseen magic acts

Both sets of competitors create routines for the second round, but just the winning team performs. That leaves unperformed acts, and Penn told me, “Maybe there’s another show in this. There were some cases, we heard from the producers, where their second routine was unbelievable but they lost the first round, so you never got to see that. There’s some wonderful magic still left on the table.”

Perhaps those acts should be performed and then be available online?

7. This is Penn and Teller’s most popular show for families

After Las Vegas performances, when Penn and Teller greet audiences, they now hear about the Syfy series. “More than any other show we’ve ever done on television, people come up to me and say, ‘My whole family watches Wizard Wars together,'” Teller told me. “Somehow I picture this as mom and daughter and father and son are all working on their tricks in the kitchen. They’re inspired by this.”

8. Why Penn and Teller would like to reveal more

I asked Penn and Teller about what is and can be revealed to the audience; sometimes it feels like the judges or the show is holding back during a critique about how a trick is done for fear of spoiling it. “My personal taste is perhaps a little more liberal than the show’s and maybe some of the magicians’,” Penn said. “I think we could be much more open about stuff. Every time we push the envelope with in how much we share with the audience, we find out the audience is right there with us.” Penn noted that, after decades of performing magic, “We still are the ones, even around 20 year olds, who are pushing for more openness with the audience. It really doesn’t hurt to know what kind of saxophone Charlie Parker was playing.”

Penn also told me, “At some point, I would like to see the show show more of the process and just be a little more naked. Allen Ginsberg said, ‘The poet stands naked on stage,’ and I think that’s pretty good advice for all of the arts.”