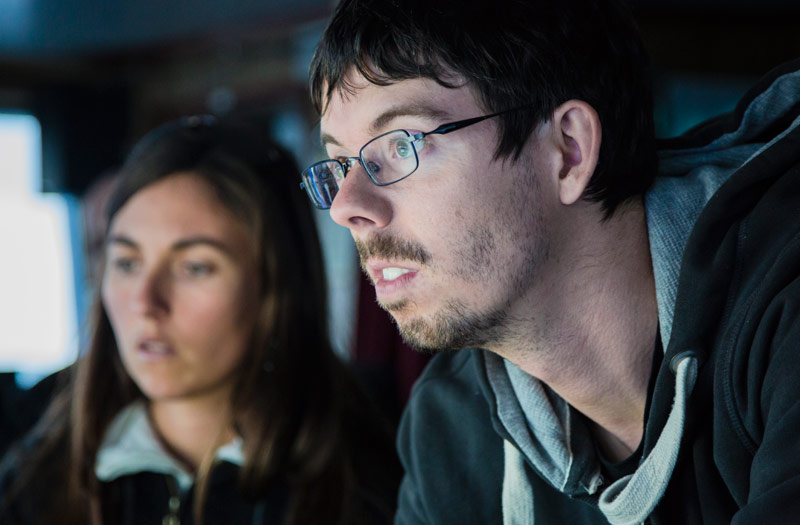 Whale Wars season 7 debuts tonight, and unlike last year’s one-night special, the outstanding Animal Planet series is actually three episodes, all three of which air back to back tonight. They follow Sea Shepherd on last winter’s “Operation Relentless” campaign in the Southern Ocean to stop Japanese whaling.

Sea Shepherd’s Peter Hammarstedt was the primary subject of last year’s A Commander Rises, and this season also focuses on him. “When we looked at all the material, the story that came through for us in that campaign was the struggles that Peter faced as a new leader,” executive producer Liz Bronstein told me.

“What I love about this season,” she added, is that whatever kind of work someone does, “it’s a story they can identify with. It’s about how tough it is to be in charge, what it’s like to be a leader.”

About 3,000 hours of footage were shot by Sea Shepherd, whose footage is now licensed by Animal Planet (the network no longer sends its own camera crews, but Lizard Trading Company independently produces the series from the footage). This year, there could have been an even longer season, but “we could only pull out three episodes from the material,” Bronstein told me.  “I wanted to keep the quality of the series up, and so did Animal Planet,” she said, so there are three episodes instead of “six long drawn-out, crappy episodes” because “I don’t think that would be fair to the audience.”

I asked Animal Planet why the three episodes are all being aired back to back, and received a statement from Andy Weissberg, the network’s vice president of programming and scheduling. He said, in part, that it is because “Animal Planet viewers responded to our two-hour special, Whale Wars: A Commander Rises, last season and we know Whale Wars superfans will love the full-night event we are offering them this year. … While it is a continuous and cohesive storyline for the season and Whale Wars 7 is being promoted as a three hour event, technically there are three separate episodes.”

Bronstein said that season seven is about this question: “How do you go on a as a leader when your crew is literally not doing what you asked?”

As a result, “this is the most emotioal season of Whale Wars” and “you will see the most heart, the most emotional and internal struggles,” she told me, adding that “the dynamics of the crew totally change this season because Paul’s not on the boat. And that’s really interesting to watch.”

Watch every season (and their cold opens)

For each season of Whale Wars, producers “try to do something really different and creative” with the cold open for the season–the footage that comes before the title sequence in episode one. “I’m really proud of this season’s open,” she said.

You can actually go back and watch each of those, because every episode of every season is free on Animal Planet’s web site between now and Jan. 5.

I  Season one starts with the “shooting” of Paul Watson, and then flashes back to Terri Irwin christening the Steve Irwin and a summary of Sea Shepherd’s actions and history. Season two opens with a whale being graphically killed while the Sea Shepherd crews watch; season three starts with Paul Watson saying “as a species, we’re insane,” followed by the dramatic introduction of the Ady Gil, foreshadowing its destruction. Season four is Paul Watson talking about the extinction of species, saying that “desperate actions are needed when all else fails”; it then cuts to a montage of confrontations.

The cold opens are often master classes in dramatic editing, and all are a reminder just what an extraordinary series Whale Wars still is.