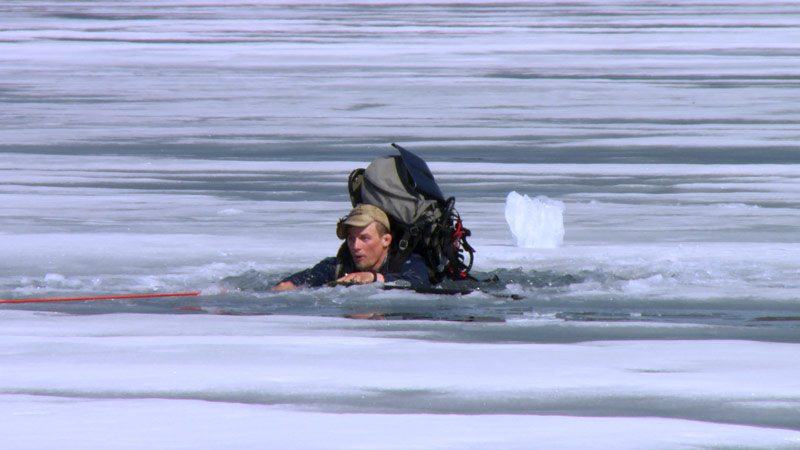 Ultimate Survival Alaska's Dallas Seavey is rescued after falling through ice on a thawing lake. (Photo by National Geographic Channels)

“Nothing is staged. Everything you see those people do is real,” its creator and executive producer Brian Catalina told me yesterday. He has previously worked as an editor on Survivor creator Mark Burnett’s Eco Challenge and was the season-one showrunner of Deadliest Catch.

In our conversation, we talked about how the show is produced, how it manages to be both dangerous and safe at the same time, and why viewers are justified in being skeptical about the authenticity and reality in reality TV.

“The show is extremely challenging to produce,” Catalina told me. He said his team has been able to “take on bigger challenges each year as we get better at producing the show, as we become more familiar with the different areas of Alaska that we can go to.”

Producing a series in the wilderness involves all kinds of moving parts and crew members. “The biggest challenge for me is to make sure nobody gets killed,” he said. “You always have to go into these things remembering: it’s a television show. I feel directly responsible for each person out there, and there’s a lot of people out there. That’s the top priority, but it’s a balance between safety and making a challenge these people are going to find challenging–it’s an incredibly skilled group of folks. We have to present a challenge to them that really is hard for them, but we don’t want anyone to die.”

The credits list several people who are “safety guides,” who Catalina said are there “as a last-ditch” resort. They “give no advice; they’re there just to make sure nobody gets hurt.” Catalina actually described the cast as “people who could be the safety guides. They’re more capable than safety people most of the time.”

“If we’re going to be in a dangerous scenario, we’ll have people stationed on a river, [for example], in case someone chooses a river route,” he said. “If you put people in class 3, 4, 5 water, it would be negligent not to make sure that there’s somebody around who’s aware of that water and is there in case of a worst-case scenario.”

The route and choices

“The trick of setting the route is to generate options. We don’t want to tell people where to go. We analyze the terrain, and we have a number of experts from Alaska who help us do this. We start looking at these routes months before we go up there to shoot,” Catalina said.

Ideally, he said, “the shortest path to point B has the greatest obstacles.” Part of the fun of producing the series, Catalina told me, is that “understanding the psychology of these people” and planning routes that play to their strengths. “We know, given the skill sets of people, that they’ll then make choices based on that.” However, producers are regularly surprised when teams choose other options–not crossing a river when producers thought they might, for example.

“Some of those scenarios, we rig, and we’re very open in the show about saying so,” he said. By this, he means equipment or other resources that is “placed, deliberately, to create an option.”

A cast member later told me that the route planners and producers are exceptionally good at making sure there are points at which routes converge so teams will likely encounter each other.

The cast of Ultimate Survival Alaska are described by National Geographic Channel materials as “the world’s toughest outdoorsmen,” and are selected for their skill sets–though they also have personalities that make for good television.

The teams are cast to produce a “dynamic mix of people, personality types, and backgrounds.” Some people have met and been on teams together on previous seasons, but most meet their teammates a few days before filming starts. “We don’t sequester them and surprise each other, but they don’t have a preparation period, really,” Catalina said. That makes for greater drama, of course, as the teams learn to work together while they’re racing.

Season three is 13 episodes, and “it’s about a week per episode.” It is not non-stop, but there are no breaks to return to civilization. “We travel between each leg to go to different locations, so there’s some downtime in-between legs,” he said, and when I asked, told me, “they never go to a hotel–ever.”

Whether or not parts of the show are staged, faked, or recreated

“I was making for Discovery Channel when the Bear Grylls fiasco happened. That was a real lesson,” Catalina told me. “I was stunned; I vowed at that time that was never going to happen, we’re never going to have that kind of problem.” He’s referring to how Bear Grylls’ show lied to its audience.

I asked about one particular moment discussed in detail by one critic of the show: that a canoe used by the Military team in the second season changed in one shot, possibly suggesting it was recreated for certain shots. “That’s all shot at the same time, all in one. Categorically, no,” Catalina said.

Why the accusations that Ultimate Survival Alaska fakes things? “I think you have folks who have watched other shows and think they’re being fooled, and they don’t like it, and I get that. I understand why people would be suspicious of television; certainly that is probably healthy,” Catalina told me.

“There are completely fabricated shows on television right now that are presented as fact. That’s really not what we do, though,” he said. “The folks we have are so capable; that’s the beauty of it. We can pretty much put them in any kind of situation you want and it’s going to be real.”

The maps’ accuracy and narrative descriptions of the routes is one point of contention for some critics, who point out that they’re not accurate or misrepresent the actual terrain. “The on-screen graphics are designed to create a relationship between point A and point B, and call out some of the obstacles. They’re not intended to be Google Maps, or they’re not topo maps–they’re a storytelling device designed to clarify,” Catalina said. “It was never intended to represent anything to scale; it’s a graphic depiction of the route.” He added they also show “where are the teams in relation to point A and point B, and that’s always accurate.”

As with any reality TV show, editors must take tons of footage and turn it into something coherent and, hopefully, accurate and representative. Ultimate Survival Alaska is “a 72-hour scenario compressed into 42 minutes. That’s challenging,” Catalina said. “I think that’s sometimes frustrating for a viewer, because clearly they’re not going to see everything that happened, and they’re not going to see every step everyone takes. You have to truncate some of the things that happened in order to get through the story.”

That means they can show less than 11 minutes of footage per team to illustrate what happened over 72 hours. The editors are also masterful at creating suspense; the show frequently reminds me of Whale Wars because its act breaks come in the middle of terrifying moments, sometimes which turn out to be not-so-terrifying and others which really are, like someone falling through ice into a lake.

Each team has two crew members, a camera operator and a producer.  Their footage is supplemented by GoPro shots (that’s how there’s point-of-view footage of things like someone falling into ice or falling off a dog sled: they’re wearing small cameras) and other camera operators. Catalina said that they will find “vantage points where a long lens shooter can” get shots of the contestants, and they also use some zone coverage, meaning they’ll have more cameras at a predetermined, important place, such as the start or finish.

A cast member later used the phrase “fucking badasses” to describe the camera crews that travel with the teams, and told me that, in moments of greater danger, the camera crew may be separately advised by safety experts about how to traverse an obstacle.

The connection to Mark Burnett and Eco-Challenge

Catalina worked on season one of Survivor as an editor, and before that on Mark Burnett’s Eco-Challenge, a show some people still miss. Ultimate Survival Alaska is probably the closest thing reality TV currently has to Eco-Challenge, and Catalina said there’s a reason for that.

“I created this show, and it’s certainly inspired in part by Eco-Challenge. Prior to working for Mark, I was doing Outdoor Life Network shows, back before reality TV was on, and I was doing a race called Raid Gauloises, which was a European adventure race,” Catalina said. “I knew adventure racing very well. I cut a couple races that Mark was a racer in–Mark was an adventure racer before his television career. I know a lot about adventure racing, and I had other shows that I did in Alaska, so when I went to work for Nat Geo, they asked me, ‘Do you have a show you’d like to pitch us?’ I said, there’s one show that I’ve always thought of, and that would be a wilderness adventure survival race through Alaska. That’s where it came from.”

As to his later work with Burnett, Catalina said, “Mark Burnett was an incredible mentor to me. I was really lucky to have an opportunity work with him,” he said. “He was very hands-on, it was a mom-and-pop shop in those days. … I learned so much from Mark and his success obviously speaks for itself. He’s one of the people who created reality TV. I can’t tell you how much I learned working in his shop; I’m always going to be grateful to Mark Burnett, no question about it.”

I asked Catalina if the series might ever leave Alaska, which of course hosts a lot of reality TV shows right now. “That’s certainly a viable idea. There are many other really challenging environments, and Eco-Challenge is testimony to that,” he said.

“There’s a lot of shows about Alaska on TV right now, but I think the thing that really sets us apart is that it’s really got a lot of Nat Geo DNA in it. It’s designed with National Geographic in mind.” Catalina added, “I grew up on Nat Geo, I still get Nat Geo–it’s my birthday present from my mom, God bless her, that I’ve been getting for 20 years. We really strive to embody the spirit of Nat Geo when we make the show.”