After a three-week break, Top Chef Boston has returned with Bravo’s own Andy Cohen and Julia Child’s friend and frequent on-screen partner Jacques Pépin all in the same episode. That’s kind of like dunking an Oreo in a fine French wine. While it was full of homages to the pioneer in food reality television, it wasn’t full of a lot of drama or excitement. 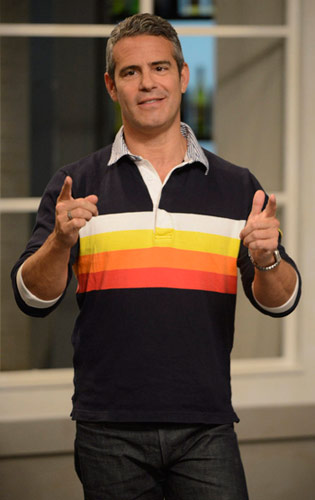 Andy Cohen, guest star
The former Bravo executive turned Bravo star showed up to guest judge the quickfire with his college roommate, who Andy called “the straight version of me.” That’s like saying “the pig-less version of bacon.”

Kids these days
For the $5,000 quickfire challenge, the chefs had to make ramen using provided noodles and only the ingredients that came from college kids. The dorm room grocery bags seemed to either be assembled by the show’s culinary producers, or I don’t understand college students. A half jar of salsa, Doritos, pizza, even edamame, sure. Shrimp? Bacon? Miso? In a dorm room?

Top Chef Sex
Andy Cohen asked the chefs who’s hooking up, and he was either 1) confusing this show with the other shit on Bravo, or 2) there is a whole other Top Chef we’ve never seen. Speaking of sex, while tasting the ramen dishes, Padma said, “I like a hint of a hot dog,” and Andy Cohen said, “I do too.”

Copy or modify
The winners of the challenge were Gregory and Mae; Mae modified Julia Child’s duck à l’orange and was rewarded with the win for that, while Gregory attempted to recreate Julia Child’s coq au vin. But both received the ultimate complement from Jacques Pépin, who said, “I’m sure that Julia would have enjoyed both dishes.”

Julia Child
I can no longer think of Julia Child without thinking of this awesome PBS Digital Studios remix (by John D. Boswell aka melodysheep). Enjoy, and enjoy replaying it over and over again. (“You need some fat in your diet/or your body can’t process your vitamins!”)