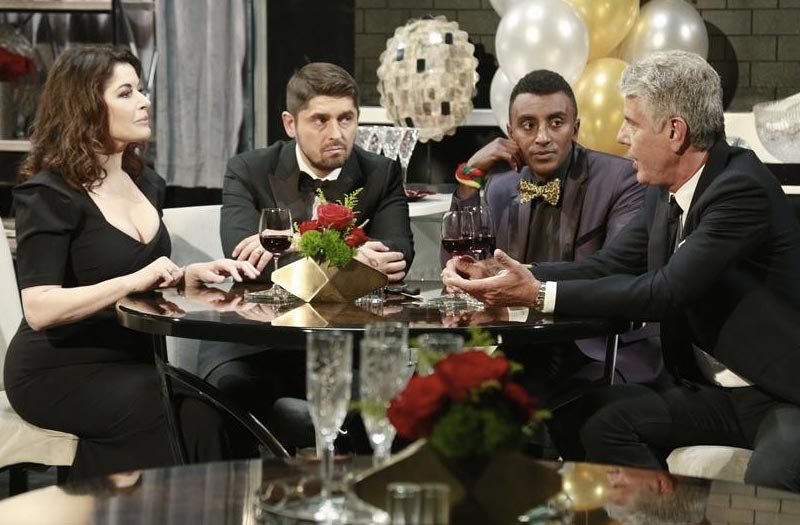 Another season of The Taste has concluded, and like certain wines or Anderson Cooper, it keeps getting better with age. The finale featured a live studio audience of the contestants’ friends and family who could witness Ludo’s abuse in person, and came down to three men, the final two of whom were also in a separate competition to see whose deep V could expose the most chest hair.

The winner, Gabe, was chosen by blind tasting of a three-course meal at the end of the two-hour finale. He was on Marcus Samuelsson’s team, as was third-place Tristen, who Marcus offered a job in New York with his team. Benjamin was left to stand in the confetti.

Long-suffering Jen–who kept cutting herself and needing the medic, but that’s nothing compared to the therapy she’ll probably need from enduring Ludo’s shrieking in her face–was eliminated during the semi-finals.

The best part of The Taste season 3 may have been its conclusion: the credits sequence showing Ludo pouting about losing, ending with a shot of his angry stare, which was his response to a producer’s question about how he felt. Really terrific.

Nigella Lawson was again left to become the defacto host, after her team was decimated early, but at least she had a chaise lounge to curl up in backstage, which may have been my second-favorite thing. No, wait, that was Anthony Bourdain screwing with Ludo during the team challenges, such as taunting him with a can of Spam. (Also a favorite from this season: this.)

Despite Ludo’s insanity, it’s clearly genuine passion/anger/personality disorder, and he’s part of a strong panel of judge-mentors. Their chemistry is a big part of why the show works, and this season seemed to emphasize that even more. Adding the taste-off elimination challenge gave the mentors a great opportunity to coach and show off their abilities as teachers, and they’ve come a long way.

During the first season, I didn’t really imagine The Taste could become a broadcast network staple, but now it’s a show I hope ABC keeps around.