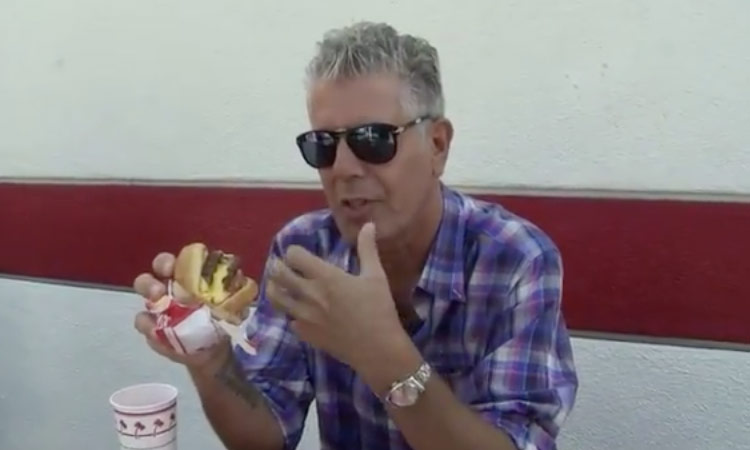 The Anthony Bourdain In-N-Out video is currently making the rounds, because it’s so spectacular to watch a chef known for exploring and extolling world cuisine eat fast food and analyze it in great detail.

In this video, provided to me by the producers of The Taste, Kinetic Content, Bourdain sits outside a Los Angeles In-N-Out restaurant, “the only fast food chain I actually like and think is reasonably good for the world.”

He also describes the “love and admiration” people give him, not judgement, when he carries it through the lobby of his hotel.

By the way, you may have seen this elsewhere, such as Eater’s YouTube version, which says Anthony Bourdain “spoke to us,” which sounds like Eater interviewed him for this video, which they did not. Uploading a video is not the same as talking to someone, dear friends at Eater.

In the video, Bourdain says he looks forward to filming the ABC cooking competition in part because he can eat In-N-Out on the way in and out of the city.

The Taste taped last September, and is now nearing the end of its third season, and has continued to improve. The two-hour episodes aren’t full of filler but are too long, dragging until they conclude with a high-energy face-off between two contestants being coached by their mentors.

If you can stand Ludo berating his team members, it’s terrific television; I just wish we’d have more of an opportunity to see Nigella coach her teammates in that challenge.