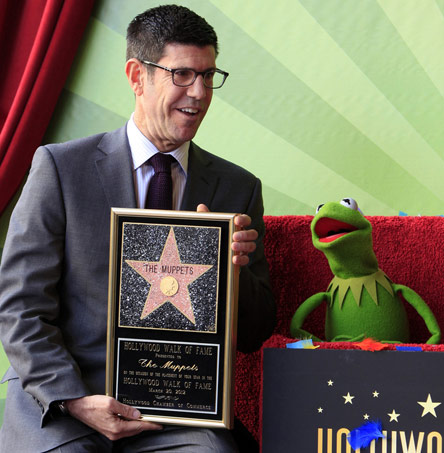 Discovery Channel’s new president Rich Ross has been in his new job for around three days, but he faced television critics and reporters this morning, and said repeatedly that he’ll be moving Discovery Channel shows away from scripted, fake things, and even from sensational stunts such as Eaten Alive, which failed to deliver on the promise of its title.

There has been a significant increase in artificiality and fiction in Discovery Channel’s nonfiction shows–particularly during Shark Week but also its reality TV series, such as Amish Mafia–that coincided with Eileen O’Neill’s tenure. (She took over Discovery Channel in 2011; in August, she was, uh, promoted and now heads Discovery Studios.) Those have damaged the network’s credibility.

Rich Ross was hired to run the channel in late October. He’s the former CEO of Shine, where he oversaw franchises such as MasterChef and The Biggest Loser; previously, he was chair of Walt Disney Studios and, before that, president of Disney Channels Worldwide. (His full bio has more detail.)

At the Television Critics Association press tour, Ross he said a lot more than I expected him to, and answered every question. And his answers were impressive. In no uncertain terms, he said the network will shift directions under his leadership, and there couldn’t be any better news for Discovery Channel than that.

After someone else asked about the fake Shark Week documentaries and fake reality shows, I asked  (excuse me: I “asked eagerly” and Ross replied “patiently,” silly me) about repairing relationships with people who were disappointed by the misinformation being spread by fictional documentaries. In particular, I referenced scientists, some of whom were even betrayed by producers who lied and manipulated footage as part of documentaries for last summer’s Shark Week.

In his answer, which is below, Ross cited his just-announced hiring of John Hoffman, who will oversee all development of reality TV series and specials; Hoffman previously worked at HBO Documentary Films for 17 years, and in a statement, Ross said “Given our legacy, our documentary filmmaking must be valued and protected.”

What he said at TCA was even better, though. Highlights from his press conference, with my emphasis:

“I don’t think it’s actually right for Discovery Channel, and it’s something that I think has, in some ways, run its course. I don’t think you’ll be sitting with me here next year asking this question about something I put on, whether it’s a series or a special. They’ve done very well, many of them, but it’s not something really, I think, is right for us.”

On relationships with scientists and viewers

“I announced this morning the hire of one of the top documentarians and storytellers, John Hoffman, who has a long history of telling great, authentic stories and working with scientists, doctors and everybody in between. It was not just a signal. It was a message that is very important to us and very important to me, that when people are telling those stories, they’re delivering information that is true, entertaining as well, which is also mandatory, of course.”

On the project or show he wants to do most

“I do know that what I would love to be able to do, which is something meaningful for me and my whole career, is something that impacts people to do something, to lean forward, not just to watch, but to influence them to do something. A lot of the natural history programming is so provocative in that way and an opportunity at something we’re certainly going to look at.”

“The way I look at it was it was the right intention with a packaging that was misleading. Paul Rosolie cares deeply about snakes and wanted to draw attention. You draw attention [by] telling provocative stories. You don’t have to be so sensational and overpromise. I think in his mind he thought that was actually possible. But I then think the fervor of that story got out of control. Whether it’s about a title with a question mark, I’d rather be in a situation where the story is clearer, it is what you want to watch, but you don’t expect at the end of it something that can’t possibly happen.

I don’t believe you’ll be seeing a person eaten by a snake during my time.”

On the Discovery Channel’s mission

“The most important thing that this network, the flagship of this company, can stand for is, if there was one word, it would be ‘authentic.’ And it’s really important that we look into this incredible brand and all the programming that we make and make sure that’s what we stand for. And it’s a filter in which we’re looking at everything we have on the air and everything we’re talking about moving forward.”

On expanding the network’s audience

“In terms of meeting the ratings challenge, one of the realities of our world, the Discovery Channel that I’ve come into is more narrowly niched than it ever needs to be or should be. Being more inclusive to women, to younger men, is the way for us to build back the audience to being a No.1 TV brand, a No. 1 brand that is for the whole family and not just for the men in the family. And I think that’s a way to attack that very clearly.”