Why The Great British Baking Show is so delicious

In the UK, McDonald’s fries have four ingredients.

Like our fries, our cooking competitions in the U.S. are mostly overstuffed with unnecessary things, and the difference is clear in the wonderful, filler-free The Great British Baking Show.

Earlier this month, PBS began airing the fifth season of the show, which is called The Great Britsh Bake-Off in the U.K. where Pillsbury doesn’t own the rights to that name. Some enterprising people in the States have watched it online and adored it for years; now it’s available legally, and PBS has full episodes online for free.

At first, the show seems so gentle, even sedate, especially compared to our loud, dumb, Food Network-style shows. But The Great British Baking Show does not lack entertainment, action, or drama.

For example, during last week’s episode, a contestant dumped his baked Alaska in the trash out of frustration, and then carried his trash ca–excuse me, bin–up for judging. The judges’ response was surprising and charming, with Mary Berry telling Iain, “I think you know that it got the better of you; it was just a moment that you want to forget, is that right? We all make mistakes.” (More on “Bingate” and the controversy that erupted.)

A U.S. version would have hammered that so much, sensationalizing it and blowing it out of proportion. Also, a U.S. version would have likely not had a cast member who would have dealt with it as he did. Instead, the cast would have been full of people with personality disorders and a contestant in a similar situation would likely have knocked over the freezer and set fire to the tent as he stormed out. To his credit, Iain actually recovered and admitted, “I didn’t cope with the situation very well.”

One thing that works in The Great British Baking Show contestants’ favor is that this isn’t the typical pressure cooker reality show experience. Episodes are filmed on weekends, and the contestants go home in between, where they get to practice two of the next three challenges. That doesn’t minimize the stress of any of the challenges, though. As their examples make clear, trying to produce something they’ve done well at home without cameras or lights is challenging, never mind the technical bake where they work from limited instructions.

That allows them to be more creative and experimental, and they also bring things from home such as tools they’ve made or special ingredients. It’s fair since everyone has the same opportunity, and it really does elevate their bakes.

A few years ago, CBS adapted it as The American Baking Competition, and actually did a pretty decent job of copying the show’s DNA. But it did not work. I think it was for the same reason the first Harry Potter movie is rubbish, and why Fox’s Gracepoint was such an exercise in wanking: they copied excellent source material, but in the process ended up with copies, not new things full of their own life. It was like a photocopy of a photograph of a real thing, and that photocopy will never come close to being the same as the original.

CBS also replaced Mary Berry, cookbook author extraordinarie, with former The Apprentice: Martha Stewart contestant Marcela Valladolid, who just didn’t provide the same kind of contrast to Paul Hollywood that Mary Berry does. Even though producers tried to play up Paul and Marcela’s flirtation, the two judges had very little chemistry–even though, ironically enough, off-camera they had an affair that almost ended his marriage.

Mary Berry is a terrific judge, exuding positivity while never shying away from criticism. Paul Hollywood criticizes gently, too, but they’re each demanding in a different way. Mary incredibly balances high standards with empathy, and thus comes off as so warm and caring, especially when she’s acknowledging problems. Also, her name is Mary Berry! It’s so delightful.

Also delightful are the two hosts, Mel Giedroyc and Sue Perkins. They play off each other with a super light touch but feel like best friends, which makes sense since they’ve known each other since university. Their humor, which plays off everything from the episode’s theme to the contestants’ baking, is light and airy. Their many puns and even innuendo is always charming.

Just watch the start of episode four when they introduce the self-saucing pudding puddings and play with the word “saucing.” Mel and Sue mostly seem to be hanging around having fun, not emceeing, and that works. All together now: “On your mark, get set–bake!”

They personify the effortlessness, ease, and fun of the rest of the show–the tent, the whimsical illustrations of the food, the shots of the countryside. It’s all so pleasant and delightful, even when things go wrong, or contestants make bad choices.

Not every show needs artificial stakes in every act, nor dramatic act breaks. It can just be what it is: home cooks baking in a tent. As the pendulum of reality television swings back toward authenticity from artificiality, perhaps networks and producers in the U.S. can learn from The Great British Bake-Off and relax a little bit. Let a cupcake be a cupcake; don’t deep fry it and cover it with cheese sauce and sprinkles and give it a soggy bottom. Mary Berry would appreciate that so very much. 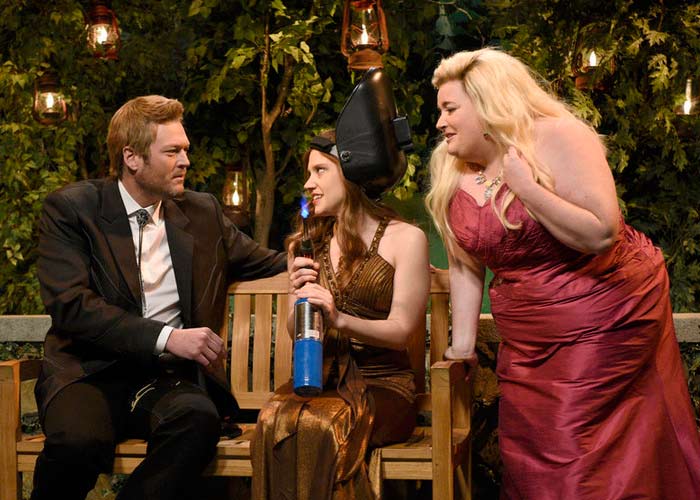