When the episode of The Great British Bake-Off that aired last week in the U.S. on PBS aired in the U.K. back in August, it generated hundreds of complaints. That was because of Iain Watters’s failed baked Alaska that he threw away and claims that Diana Beard sabotaged Iain’s dessert. It became known as “Bingate” and “#JusticeForIain” trended on Twitter.

Iain was eliminated because of his melted baked Alaska showstopper, which so frustrated him he pushed past one of the two hosts and dumped it in the garbage–excuse me, bin. Diana had briefly removed his from the freezer. Watch what happened:

“I’ve chatted to Diana a couple of times since but I’ve never asked her why she did it. The Bake Off told me it was out of the fridge for only a minute but I think it had to be a lot longer than a minute to melt as much as that. I was just really shocked that it had been taken out of the freezer. I don’t know why it was taken out.”

But host Sue Perkins said that had no effect, because Iain’s dessert

Still, the U.K.’s regulatory office Ofcom received 12 complaints, while 811 people complained to the BBC, The Guardian reported. Ofcom dismissed those complaints, saying “they do not raise issues warranting further investigation under Ofcom’s rules.” 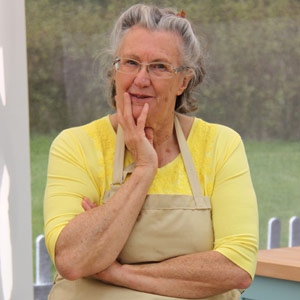 Mild spoiler ahead for this week’s episode, but one that fueled the conspiracy theories: Diana left the competition after that episode and before the next episode–which airs in the U.S. starting tonight. But her exit was for an unrelated reason, as she told The Guardian:

“I don’t want people to think I’ve wimped out. It’s very sad that I had to go. Yes, it was hard work, of course it was, but the reason I had to leave the show was because I was down in Newbury and I fainted in the restaurant on the Friday night and I bashed my head and spent a night a night in Basingstoke A&E and I’ve lost my sense of taste and smell. It’s an absolute bummer. My neurologist says it may never come back.”

The best part of all this for me is how low-key all of this played out on television; it illustrate one of the reasons why I love the show so much. It’s also inspiring how passionate people are about fairness to complain about something this relatively mild.