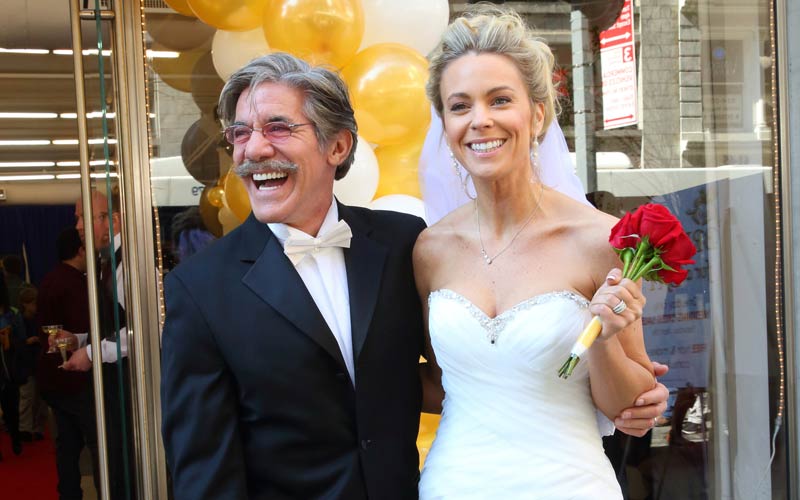 Kate Gosselin flirted with the idea of being Geraldo Rivera's wife on Celebirty Apprentice. (Photo by Douglas Gorenstein/NBC)

Celebrity Apprentice is burning through its celebrities rapidly, dispatching two more last night. Neither were particularly interesting or dramatic characters this season, and they went home in two so-so episodes. There wasn’t quite the drama of last week’s showdowns, even with (or perhaps because of) a team swap. But there’s clearly more to come, especially with Real Housewives Kenya and Brandi. A recap of last night’s fun and fundraising.

One project manager down
After a task involving creating a spread for Cosmo, project manager Jamie Anderson was fired for her instantly-regretted decision to bring Kenya and Kate Gosselin back into the boardroom, not Brandi, even though there seemed to be a pretty clear and totally surprising consensus that Brandi is annoying. (Correction: The previous sentence earlier reversed Kenya and Brandi’s names; apologies for the error.) Later, Terrell Owens was fired for his inability to bring in money during the fundraising task, and he basically Gilbert Gottfried himself and didn’t try to argue otherwise. As a reward, he got a lecture from Ian about how wonderful he is.

Rounding up
The second episode started with a team swap was a fundraising task, with selling wedding dresses being sort of beside the point. Even though it was only an hour, it kind of dragged, and the most entertaining part was Brandi disappearing to throw up and have a panic attack. Together, the two teams raised $587,327, which Trump described as “$600,000 almost.” Trump also described it as a “$2,500 difference,” but it was actually $2,233: Geraldo’s team outraised Ian’s team $294,780 to $292,547 according to NBC’s recap.

Split the difference
I totally bought into the promo that teased Trump doing something he’s never done, hoping that it would be truly shocking such as critical thinking. Instead, after the fundraising task, he gave the two project managers a Let’s Make a Deal choice. Before they found out who won, Ian and Geraldo could decide to allow each of their charities to keep the amount of money they’d earned, instead of it all going to the winner. In other words, being overly cocky and confident about one’s chances could pay off for their charity or could end up getting their charity $0. Geraldo summed it up: “it would be irresponsible” to go for the whole amount. Trump, of course, disagreed, but it’s nice that both charities got money, and he also rounded it up to $300,000 each.

Touch me
While there was Kenya/Brandi drama, what the celebrities mostly brought throughout the two episodes were some fun one-liners. Kenya saying “touch me” and “wherever you’re going to touch her is where you’re going to work out.” Kate Gosselin saying, “I’m going to be Geraldo’s next ex wife,” and making even Donald Trump uncomfortable. Best of all was Geraldo dating the show instantly by saying, “selfies are the thing that’s the rage now.” And that was long after his infamous selfie.

Too much Geraldo
Geraldo stripped down for some reason, and Terrell Owens said, “I admire him for his enthusiasm, but he could have kept his pants on.” Always. Earlier, fully clothed, Geraldo demonstrated how to take a sexy selfie with Johnny Damon by wrapping himself around Johnny and we heard things like “get that other hand out.” Oh, then Geraldo humped Johnny from behind. Ian described this as “action Geraldo forced on Johnny,” which is ironic because…

…consent wasn’t an issue for Johnny Damon
Johnny Damon decided to use his wife , and apparently her consent wasn’t required: “If we’re going to do some sexy stuff, I can do whatever to her, obviously.” I think he probably meant that he could be freer in his half-naked interaction with his wife than he could with a model, but it came off sounding rather horrifying.

No credibility
There was an interesting boardroom conversation about whether Trump wouldn’t fire someone because they’re popular and bring viewers to the show. That wasn’t explicitly stated by anyone, but that was the clear undertone. Trump insisted, “I would have had no credibility.” Too late, buddy. Later Trump talked about Celebrity Apprentice as being a “tremendous show, tremendous success.” At least he’s stopped calling it the number-one show on TV.

Purple Kelly
Sig Hansen is totally getting the Purple Kelly edit, but finally emerged in the second episode only to start grabbing women and forcing them into the store. Kate Gosselin described this as “essentially abudcting them into our store” and “the same way I imagine he wrestles fish out of the sea.” In other news, Kate Gosselin doesn’t watch Deadliest Catch.

Fact checking
Kenya Moore wants to be known for her body (“You don’t want to use this face and this body”; “You want a stick figure when you could have this woman?”) but also for her brain. At one point, she said, “I’ve written a book.” This called out for some verification, and it turns out there is a book on which she listed as the author called Game, Get Some!, was published by Dark Horse Productions, and has glowing Amazon reviews such as “Just ok,” “Typical Hollywood BS,” and “This Book Sucks.”