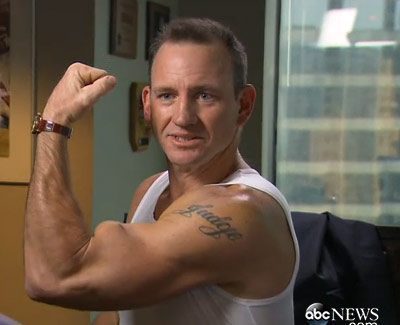 Survivor Blood vs. Water cast member Brad Culpepper is defending himself against claims that he committed insurance fraud, and now Monica regrets asking her husband to go on the CBS show with her.

Brad, who’s known as “Culpepper” to Jeff Probst and “Fuck You Brad Culpepper” to the rest of us, and who previously defended himself against claims he was sexist and racist because of his behavior on Survivor, appeared on Good Morning America and on tonight’s World News Tonight on ABC.

An insurance company is suing him for fraud after paying him $175,000 because he said he was 89 percent disabled; they say the television show contradicts that.

The ABC News segment pairs phrases from his disability claim against clips from the show, and is rather amusing, showing him diving into the water while we learn that he claimed he had difficulty getting in and out of a bathtub.

It’s a bizarre interview because he’s so defensive about how relatively simple claims seem to contradict his televised behavior. He gets so defensive that he eventually takes off his shirt to show off his disfigured bicep.

When he’s asked about diving into water, Brad says, “You keep asking me this. I was on pain medication and I had a back procedure before that.”

Asked about lifting things in challenges despite saying he’s only able to lift objects that are “conveniently positioned, Brad says, “How many times are you gonna–because I’m on pain medication.”

On pain medication during Survivor? Interesting.

At the end of the segment, he holds up a newspaper and says, “I’ve worked way too hard in my life to have this as a headline: Culpepper fakes his injuries.”

Meanwhile, according to ABC News, while Brad doesn’t regret going on the show, Monica said, “I 100 percent wish I had never asked him to be on the show. For all that he’s going through right now and being this insurance company’s target, is not worth it.”