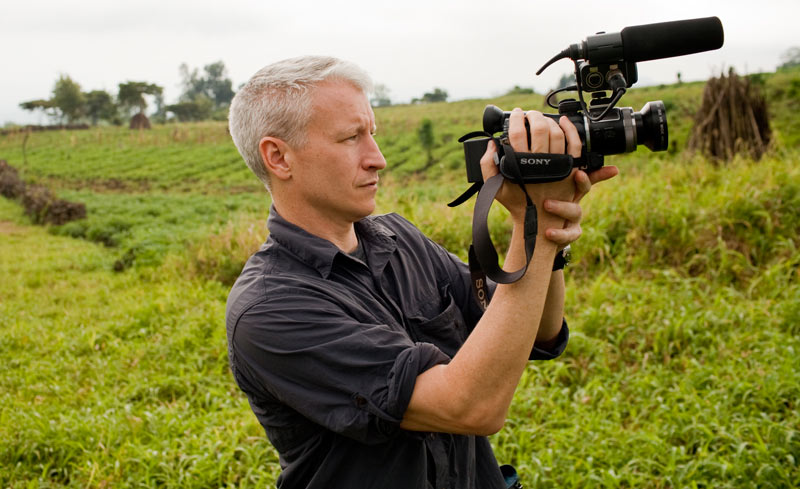 CNN's Anderson Cooper on location in The Democratic Republic of the Congo. (Photo by Per-Anders Pettersson)

More than a year ago, Anderson Cooper broke my heart. I was so crushed by what he said it’s taken me 13 months to write about it. Yes, this has to do with The Mole.

The competition series, which first debuted on ABC in 2001, remains one of my absolutely favorite reality series. I rewatch it occasionally, and revel in how it still holds up, even when I know what’s going to happen.

I loan my season one DVD to people to share in the awesomeness. I watched its so-so spin-off, Celebrity Mole, and the sad revival, which convinced me the series should just end.

But then, long after Anderson Cooper moved to CNN and away from reality TV, CNN started getting into reality.

The cable news network is increasingly focused on prime-time documentary and reality programming, and has produced some quality television. Anthony Bourdain was so attracted by CNN’s plans he essentially moved his show to the network.

Though it has a game element at its core, The Mole was not unlike Bourdain’s new Parts Unknown: there was excellent cinematography, and a focus on history and place, which were often interwoven into the challenges.

At its best, it was a smart show that was also entertaining.

Also at its best, Anderson Cooper was host, his intelligence and humor playing equal roles as he guided the players through challenges–and frequently had dinner with them, too.

My not-so-secret hope has long been that CNN would revive the series with Anderson Cooper as host.

Although he’s moved on to more serious news, he’s not moved beyond making fun of himself or having fun, as his New Year’s Eves with Kathy Griffin prove. Why not spend three weeks filming a season in the summer and then draw younger viewers to the network? I mean, other than the low ratings the show always attracted—though its then-low ratings would be crazy high now.

That brings me to last January, to the Television Critics Association’s press tour in Pasadena. CNN held an event for journalists to interact with its talent; I saw my opportunity to finally ask Anderson about the show and suggest bringing it back. Here’s what happened:

Andy: “I love your journalism and all, but I’m here to beg you to come back and do The Mole again for CNN.

Anderson: “You’re the one. There’s always one Mole person in every crowd.”

Andy: “Is there really?”

Anderson: “Yes, there is. Everywhere I go.”

Andy: “And are they completely annoying to you?”

Anderson: “No, no, I just feel like if there were more of them, maybe there would still be a show, but yeah the fact that it’s only one is indicative of why it’s not on the air, I think.”

Andy: “So we need to mass together…”

Andy: “I was thinking, since CNN now has this commitment to doing some really smart, great reality, and since you are on CNN…”

Anderson: “I’m not sure that’s the kind of reality they’re talking about.”

Andy:(sounding more like a choking muppet than usual) “It’s–it was. I–Anthony Bourdain, you in Europe, they’re the same thing.”

Anderson: “Yeah, that’s true. We did go to some of the same places. I think it was a confusing show.”

Anderson: “Well, no. I think–I was confused at times by it.”

Anderson: “I don’t know. There was a lot of–I think people were confused by it. It was a relatively complex idea. I enjoyed it; I’m glad I did it. It was not something I would do again.”

Andy: “Really? Because of the…”

Anderson: “It’s just intense in way that’s–when you’re with people that are playing a game for 30 days, after a while, you want to have one meal when they’re not scheming against each other and trying to figure out if I know who The Mole is. And no matter how many times I said, ‘I don’t know who the mole is, so it doesn’t matter who I’m looking at more, you can’t read anything into it.’ Because I didn’t know who the mole was.”

Andy: “I think it was so early, you were maybe ahead of the time a little bit.”

Andy: “We could use some smarter reality TV now.”

Andy: “Is it because of the lack of authenticity?”

Anderson: “It just feels like more and more, it’s set-up scenarios, set-up situations. How many times can you watch The Bachelor and The Bachelorette and know that it’s all ridiculous and not—they don’t stay together. I remember I was once filling in for Regis on the Regis and Kelly show and one of the bachelorettes was on. And I said to her, ‘How many times did you actually have sex with the guys?’ She looked at me like I’d asked the most scandalous, inappropriate [question]. I was like, ‘What are you talking about? You’re in all these scenes where you’re greasing each other up and then fireworks are going off, and I crossed the line by asking?’ How dare I!”

Andy: “Do you see yourself doing other nonfiction besides the journalistic stuff you do? Documentary-style reporting?

Anderson:“I like documentary. For a while we were shooting a thing called Planet in Peril, which were sort of environmental documentaries. I love the Anthony Bourdain show, and the idea of doing something like that down the road, I would love to do. That requires a fair amount of travel, so it’s hard to do when you’re doing a daily show. But I love that show. I’m not a foodie; I don’t care about show. But I watch that show because I think it’s really well produced.”

Then he was interrupted, and though the conversation was interesting and we seem to share a sensibility in unscripted programming, I couldn’t shake him calling The Mole “a confusing show.”

We did have a little closure, though, as he turned back to me for a moment:

Anderson: “I love documentary stuff. I work at 60 Minutes also, so I do longer-form stuff there. But yeah, I would love to, down the road, if the scheduling can work out, figure out a way to do that. But not food; I couldn’t do food.”

Andy: “Well, thank you very much.”

Anderson: “Sure, pleasure. Thanks.”

Andy: “Thanks for two seasons of an amazing that will live on forever on DVD.”