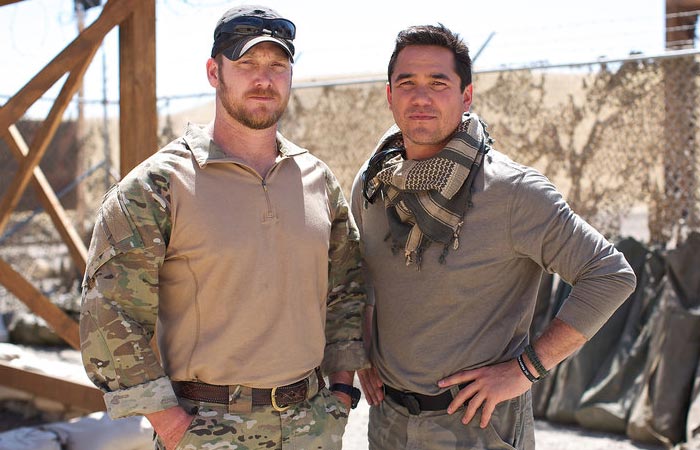 The subject of American Sniper, Chris Kyle, was a cast member on a one-season NBC reality series, Stars Earn Stripes.

The Oscar-nominated film American Sniper stars Bradley Cooper as Chris Kyle, a former Navy SEAL who appeared on the reality series in 2012. Two years ago, about six months after the series concluded, Kyle was shot and killed at a gun range.

On the series, eight celebrities completed missions alongside people who’d served in special forces or were special responders; clips from the show are still online, including the one below. Dean Cain was paired with Chris Kyle, and Cain has been active on Twitter, retweeting praise for the film. He’s also responded to/threatening Seth Rogen and Michael Moore after they tweeted what he perceived as criticism of Chris Kyle, though neither mentioned him by name.

@Sethrogen Seth…I like your films, but right now, I wanna kick your ass. Chris is an American Hero. Period. Go to war. Then we’ll talk.

@MMFlint Disparage #ChrisKyle to my face. We’ll see who is a coward. #Disrespect #Coward

There’s another reality TV connection with the film: it filmed scenes in an Afghan village set located at Blue Cloud Movie Ranch; its sets were also used by Fear Factor.

American Sniper was released nationwide last Friday and was nominated for six Oscars, is based on Chris Kyle’s book, subtitled The Autobiography of the Most Lethal Sniper in U.S. Military History, which was published in January 2012, about six months before the TV show aired.