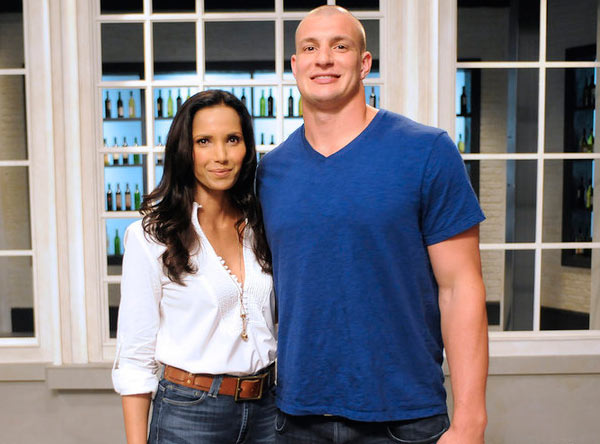 Size matters
New England Patriots’ tight end (heh) Rob Gronkowski was the guest judge for the sausage (heh) quickfire challenge, on which he said, “I need a big sausage” (heh heh). Padma replied, “me too.” For some reason, only her comment got giggles from the chefs.

Unexpected spin-off that Bravo must order immediately
“Padma and Gronk’s Cross-Country Road Trip.” Padma and Gronkowski started flirting immediately, and Padma also asked him if it was okay if she called him Rob instead of his nickname, “Gronk,” He said sure,  and then she told him, “You can call me honey.” Why isn’t this already a show?

Worst food metaphor in Top Chef history
Doug, describing working with the casing for his sausage, said “doesn’t feel like a used condom.”

Worst description of Emily Dickinson
Doug, who called her “the depressed chick poet from the 1800s.”

Worst-looking dish in Top Chef history
Katsuji, who was eliminated for his Stephen King-inspired plate. “Congratulations, you’ve made probably the most unappetizing dish i’ve ever seen in my life,” Tom said. Katsuji was eliminated, but for the taste of his food, not because of his presentation, which resembled those KFC bowls having been vomited up by someone who was also bleeding internally.

Another strong challenge
The literary challenge was inspired, mostly because it forced creativity that was visible to us. We can’t taste creativity, but we can certainly see it, and Mei’s Thoreau-inspired plate, a snowy landscape of vegetables emerging from the frost, was incredible.

A long winter’s wait
The next episode airs Jan. 7, so we have a three-week break.