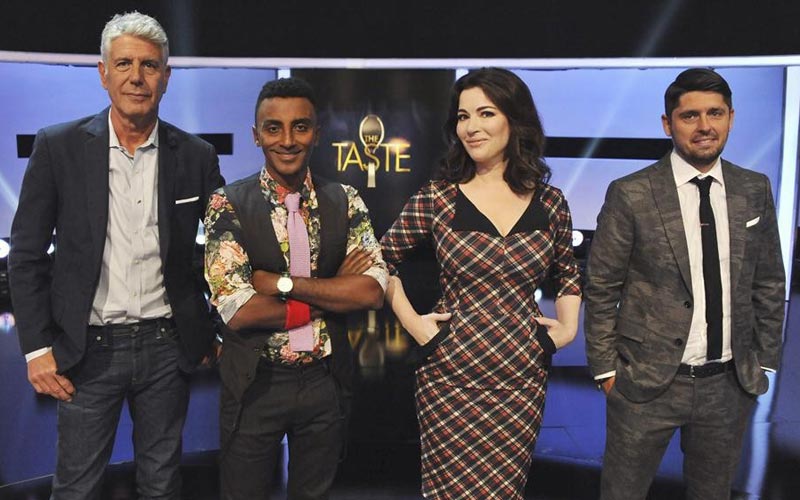 When I reviewed the first season of ABC’s The Taste, I suggested it would not last beyond one season. Thankfully, ABC thought otherwise and gave the show a shot to redeem itself, and in its second season, it really improved. It excised things that weren’t working, including former “Top Chef” Brian Malarkey. He was replaced with Marcus Samuelsson, whose intelligence and expertise elevated the series, and so did the simplification of the show’s structure.

Tonight, The Taste and its still-ridiculous spoons are back for a third season, and once again, it made changes for the better, though its strong second-season panel of judges stays intact. The first episode powering through the auditions and then moves on to the first challenge and elimination. Later in the season, it’ll introduce a new twist that Samuelsson told me “makes it really difficult for us, which is fun”: a cook-off between the bottom two chefs that the mentors can only observe.

By the way, former Big Brother jury member, Joe Arvin, and former The Bachelor cast member, Renee Oteri, are both featured on tonight’s episode, hoping their food is selected by the judges. (Neither Joe’s appearance on the CBS reality show nor sudden lack of shouting into the camera is acknowledge in the premiere.)

For more insight into the third season, read my interview with Anthony Bourdain, in which he talks about the show’s “meritocracy”; how it’s like “slipping into a warm bath” for the judge/mentors, who hang out together after the cameras turn off; and how he enjoys the show, critics be damned, because, he told me, “I like getting the opportunity to cook again. Moments of terror, the stress–that’s fun. I haven’t had that kind of stress since I left the professional kitchen.”

One moment of stress that has improved for viewers are the auditions; in season one, the judges frustratingly kept rejecting food they liked, and Bourdain talked to me how he “got burned” doing that. In a separate conversation, Marcus Samuelsson told me plating a spoon only is very challenging: “When you have a whole plate, you get a larger canvas to work on, so when you have one bite, you’ve got to be very precise.”

The end result is a competition that only comes down to who prepared better food. Bourdain told me that the food “is genuinely judged blind. It is exactly as it appears, basically. The best cook prevails always.”