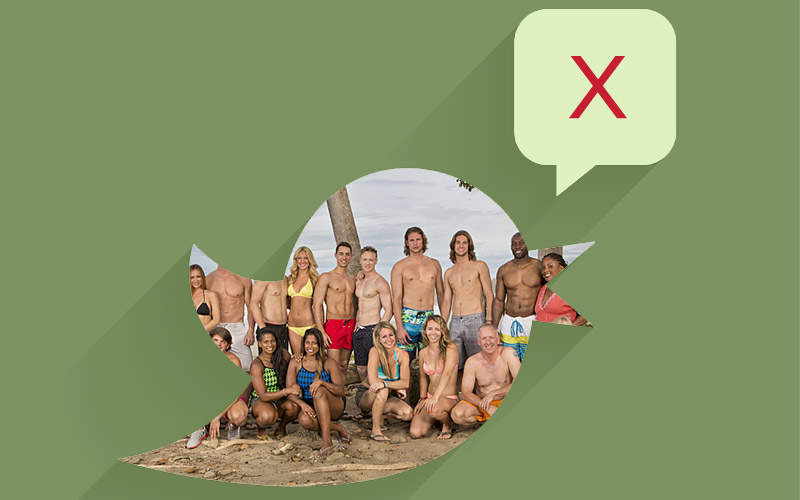 In August, Jeff Probst tweeted something ominous, using strong language: “we killed that for S29 and beyond.”

“That” referred to tweeting by the cast of Survivor, and the end result is a cast social media blackout that has made an already weak season even weaker.

Probst’s confirmation that Survivor San Juan Del Sur‘s cast would not be permitted to tweet about the show was in response to a tweet from a Survivor viewer who wrote—and errors here are original—”stopped watching after saw ontestants tweeting from home.. while show still on.”

The person appeared to be confused about how the show works, wondering why someone would be on TV and on Twitter at the same time, even though both of this year’s seasons were filmed over the summer.

It’s worth mentioning here that Jeff Probst has a history of listening to vocal people on social media, working hard to please Survivor fans in his admirable efforts to create a better show, even though the most visible results have been weird: casting Ozzy because of a single tweet, allowing 236 people to affect a challenge.

Still, I doubt the misguided person Probst responded to is responsible for muzzling the cast. If anything, the cause may have been the Survivor Cagayan cast, some of whom were responsible for what Rob Cesternino called “verbal diarrhea” on Twitter.

That wasn’t always attractive. But it was real, and interesting.

The game’s players were responding to each other and that added a whole different dimension to the show for those of us who like to read those kinds of things.

That extra dimension has been woefully absent this year, a return to the pre-social media days when cast members didn’t conduct a single interview until after the episode on which they were voted out was broadcast. It’s taken some of the life out of the experience of watching Survivor.

Teach the Survivors, don’t silence them

Tweeting about the game did create the potential for cast members to spoil things, intentionally or inadvertently.

When you have 18 people who know how a game went talking about the game, there’s a definite possibility that information will get out and spoil the surprise for viewers or spoil the narrative the editors and producers were presenting.

Incidentally, the the Survivor cast contract does give CBS broad control over the cast’s behavior; it includes provisions such as prohibiting them from having in-person contact with one another and insisting that they “not take part in any way … in any on-line postings or chat rooms or on any websites.”

Clearly, if that is still in the most recent version of the contract, it has not been enforced.

Rather than hold them to those kinds of archaic restrictions (“on-line” tells you all you need to know), I think Survivor cast members just need to be educated about how to best use social media, how to engage with each other and the world without spoiling things.

I certainly don’t want them to have their content approved or censored, nor do I want it to be restricted to the kind of generic, broad tweets that come from the official network accounts. (Tangent: CBS’ social media efforts have improved significantly over the past few seasons/years.

They’re doing really great work.) Everyone could benefit from learning how to use social media more effectively, never mind how to deal with their sudden fame.

Perhaps more importantly, though, the cast needs to be told about the reality of the Survivor fan community: that there are a lot of wonderful people who are super-engaged with the show and love to digest everything they can, including every word a cast member might write.

There are people who’ve created wonderful communities around their love (or hate!) of the show. There are viewers who take their television so seriously they’ll use their digital closeness to fawn or be cruel.

And there are a handful of terrible people who do things like befriend and then betray, using their perceived power to threaten, abuse, and blackmail. These are the trolls and catfish and even possible mental illness, and however few of them there are, cast members need to learn how to deal with that so they don’t do so naively and blindly.

That’s the real problem with social media. Not fighting between some people who still have understandably strong feelings about a game that played out eight months earlier.

Preventing cast members from tweeting during an episode only deprives more engaged viewers of an additional opportunity to engage with the show.

It doesn’t stop the cast from talking privately and leaking info to strangers they thought they could trust, or for falling into the trap of doing something for “charity,” or from being threatened by sad people.

Instead, this social media ban has only stopped Survivor from finding its way online, and I hope that the blackout ends in time for the show’s 30th season this spring.