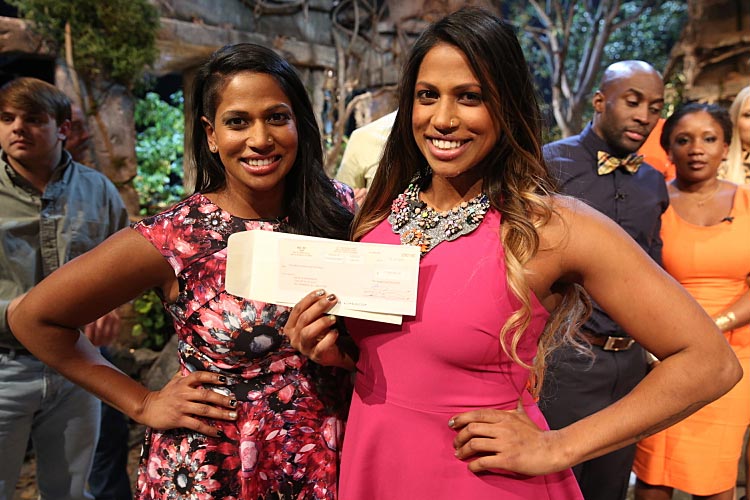 Natalie! An Amazing Race Twinnie nearly single-handedly rescued Survivor San Juan Del Sur, creating a wonderfully symmetrical arc by winning after her sister was voted out first. For that reason and so many more, Natalie Anderson is a satisfying winner who, incredibly, got there via the path of most resistance, creating a thrilling finale for a so-so season.

She easily convinced the jury that, as she said during her opening statement, that she “outwit[ted], outplayed, and outlasted better than the two ladies sitting next to me.” She won five of the eight votes, and two of the three votes against her were votes by someone for their loved one.

In perhaps the most surprising move of the game, Natalie once again turned on her alliance, telling Jaclyn to vote for Baylor. Then Natalie played her idol for Jacyln, negating all votes for Jaclyn and sending Baylor home. Jon immediately said, “I knew I liked her!”–and he was referring to the person who orchestrated his exit days earlier. It was a jaw-dropping Tribal Council, and Alec delivered a dropped jaw.

Natalie later explained that she thought she needed Missy and Keith with her at the final four stage because they were bigger threats and targets, and her gamble worked: she managed to convince Missy and Jaclyn, who she’d just betrayed in back-to-back votes, to vote Keith out instead of her. That was despite Jeff Probst basically telling them to vote out Natalie because she was a huge threat who’d win the game.

At the reunion, Natalie said that, when she played the idol, “I literally blacked out,” and has no memory of one of the season’s best moments, when she asked Jaclyn, “Did you vote for who I told you to vote for?”

Of course, this season couldn’t end without the cast failing to deliver once more, and for me that was the final Tribal Council. I’m no fan of bitter parties, but this was kind of the opposite: flat and lifeless, save for an emotional–though question-free–speech by Baylor about her mom. Then Reed stood up and auditioned for a Tony award with an overwrought performance that dumped a whole bunch of invective on Missy, calling her the “wicked stepmother” who was guilty of “abusing the help.” A fan of the show like Reed should know that the game does involve using people in and out of your alliance, and perhaps Missy didn’t do that skillfully, but I’m not sure what purpose his tirade served.

The most brutal part of that was not Baylor crying nor Missy condescendingly telling Baylor to stop crying, but what came at the reunion: Missy revealing just how painful Reed’s words were, because “I have been a stepmom,” she said. Reed tried to backpedal by saying it was about her behavior in the game, but it was a striking example that these are real people with real feelings.

Along those lines, Keith was moved to tears when Probst reminded him of his Tribal Council fail (“stick to the plan!”). Keith’s a good guy who did his best playing a game he didn’t know how to play, and I felt bad for him and even regretted the criticism I’ve hurled his way.

The finale was not one that felt padded; instead, it was full of increasingly high stakes and tough challenges.

Not everyone was up to those, however. Every time we saw Missy, she appeared to have received more treatment for her foot: first a harder, bigger cast; then a shoe cut open so she could walk (she said it was Jon’s shoe); then crutches that appeared to be disguised to look like sticks. Later, she arrived at the final Tribal Council in a motorized scooter. Not really, but it seemed like that was coming next. She also sat out all of the challenges except one, with Probst basically conceding that she couldn’t participate so she could just sit out. While it makes rational sense, I’m still not comfortable with someone who’s incapable of doing much of anything being allowed to stay in the game.

The one challenge Missy competed in was on that was Keith’s to lose, because he literally got to practice on the exact same challenge apparatus for hours and hours. That was his reward from a previous challenge, and it was an extraordinary, unprecedented advantage. Jeff Probst couldn’t handle himself and said during the challenge that involved a “big learning curve out of the gate” and “you only get that touch by practicing again and again.” I was going to joke that he then said something like, Not that we allowed anyone to practice, ahemKeithahem!” But then Probst basically said that: “Keith had an advantage in this challenge–the question is, did it help?” Um yes.

All the challenges paled in comparison to the massive final immunity challenge, which took place on a tower with 57 steps that Natalie, Jaclyn, and Keith had to ascend and descend over and over again. Having failed to encourage Jaclyn by screaming at her, Probst gave up and focused on Keith and Natalie, who were getting close to solving their puzzles. But then! Jacyln came from behind and solved her puzzle first. But then! It was a two-puzzle challenge, and she had to descend the tower once more. And then! Perhaps due to fatigue, she basically fell an entire story, losing her grip on the pole that they were sliding down. It was a scary moment, and Probst rushed to make sure she was okay; she was, incredibly, and recovered quickly to win immunity.

Probst at least had the self-awarness to say that Jacyln won after “I’d written her off” and pointed out that players should “never ever give up in this game”–and that should include the host’s commentary, one would think.

Our host and executive producer had another flash of self-awareness during the reunion when he read a tweet from a viewer who begged him, “please don’t go in the audience.” Probst did anyway, and said, simply, “sorry.”

Earlier, though, Probst showed us the small amount of cooked rice the Survivor contestants live on. Okay, that’s fair, and good to remind people, especially those slower viewers who think the show is being filmed in real time. Then, however, Probst decided to compare that to a typical day’s food. Okay, sure, tell us that we eat 2,500 calories a day and the cast eats 100 calories. But no: instead, he had to show us three plates, and then describe the food on each plate. I’ve joked a lot about Probst’s increasingly irritating exposition and narration, but I don’t think I’d have ever joked that he would be spending several minutes of prime-time network television explaining breakfast.

There was a lot of time wasted during those break-in segments, and the reunion, predictably, largely ignored Natalie so Probst could say sexist things like, “‘you’re a woman, it’s different for you,” referring to Jaclyn and her arguments with Jon. Ugh. No, Jeff, arguments aren’t different for people based on their genitalia. The only reason they might be different is because people make assumptions about people based on their genitalia instead of on that person as an individual.

I was glad Jeff spent some time talking to Austin Russell, the kid who created last week’s reward challenge, who was a little awkwardly shy but then really delivered: “I just wanted to help the show. You’re welcome.”

He did help the show, but really it was its winner, Natalie Anderson, who stoked this season’s fire back from smoldering coals to an epic blaze. She earned her $1 million, and the respect of both Survivor and Amazing Race fans.