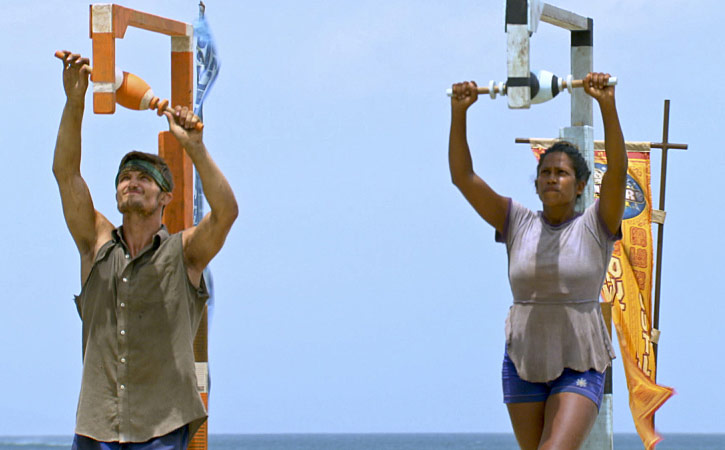 Jon Misch and Natalie Anderson are now competing for control of the game. (Photo by CBS)

Along the way, there was a lot of drama, some of it comical, such as when Reed dismissed the reward challenge’s prize because his family owns 12 horses. (Since he knows that exact number, I can only imagine how wealthy his family is, being able to afford someone to count their many horses.) Reed then turned around and calling Baylor a brat, apparently because a mirror wasn’t available.

Reed failed to get people to turn on Jon probably because he was a strategic threat, but his this-isn’t-really-me behavior probably didn’t help.

Speaking of, Jon was again a condescending drip, particularly in the first episode, yet he’s also one who is impossible to full-on dislike as a character because he keeps revealing things about himself, this week that his father is dying from brain cancer. Some of that is definitely strategic, and I will give him credit for thinking about the endgame and how the jury will perceive him, but it’s so often at the expense of the current moment that his game play comes off as more accidental than intentional, and not really savvy or smart.

Also, both Jon and Jaclyn said things that make them so difficult to root for as strategists. Referring the way alliances shifted and again made her and Jon decision-makers, Jaclyn said, “I don’t understand why this keeps happening.” Oh, I don’t know either. Maybe BECAUSE IT IS SURVIVOR?!? Jon later said, “I thought this was done,” with “this” apparently referring to making the decision about who would be voted out next, because usually on Survivor plans are made and stay the same.

It was that post-Exile conversation between Jon and Jaclyn that turned into a full-on fight, with Jaclyn refusing to speak to him for five hours. The editing suggested she was being unreasonable, but he’s so consistently marginalized her that I don’t blame her for one second. Earlier, Jon lectured Jaclyn about giving Natalie credit for encouraging him to play his idol at Tribal Council, which saved him from being voted out. “If I do a play that’s really good like that, don’t give them credit,” he said. Look, Jon, dear, that happened at Tribal Council with everyone watching. That’s like standing on the beach and trying to take credit for the sun setting.

Of course Jon found a new idol, so yeah.

He was sent to Exile after a reward challenge that featured the absolute best art design of the season. Rocks were suspended over skulls representing each player; three cuts to a rope and the rock would fall, smashing the skull, which was filled with bright red paint. The effect was spectacular.

And damn these people, they basically forced Jeff Probst to stop the challenge because they just decided to negotiate who would win (Missy) and who would go to Exile Island (Jon). I wish Probst would have ordered them to not talk to each other and let the challenge play out instead of caving to this cast’s “everything is negotiable!” approach.

There was also the strange, languid amount of time spent on Alec flirting with Jaclyn, inviting she and her boyfriend to come stay with him and hang out in Orlando. I’m sure he was just trying to be nice, but it just came off as hilariously weird, like he was trying to talk them into a four-way. And although I perform improv there and know the city has a lot more to offer than the jokes give it credit for, somehow it’s still hilarious to hear someone say, “Downtown Orlando is a blast.”

The second episode’s reward was a king-size bed for three people to share, and perhaps just to make Alec jealous, Natalie chose Jon and Jaclyn–though she used that against them by talking to Baylor about how much she disliked Jon. “If he wins, I will literally kill myself,” she said, and the commenting on her own hypocrisy, said, “Who does this? Sleeps in bed with the enemy and then the next day votes him out.”

Alas, she couldn’t, because Jon won immunity, never mind that he has back-up immunity. What’s strange is that everyone except Jon and Jaclyn voted against Alec, which means Natalie had everyone on her side, but they didn’t go after Jaclyn. Wouldn’t that have been a bigger strategic move and sent the same message? Perhaps Natalie couldn’t talk Missy into that, or didn’t want to risk it? Still, she was going behind Jon and Jaclyn’s back, so why not just take full advantage of that opportunity?

(Update: As Aaron pointed out in the comments, if Missy was going to vote for Alec all along with the split-vote strategy, she wouldn’t have been in on Natalie’s plan. I made an assumption about that which was validated by something ridiculous: Natalie favoriting a tweet in which I said something similar. Of course, that favorite doesn’t indicate that I was right; we’ll find out what Missy knew at the start of next episode, I hope.)

Natalie really has become this season’s hero-in-waiting, and not just because she wants Jon out, though that’s a big part of it. She told us, “I’ve been wanting to get Jon out ever since he voted out Jeremy,” but of course she is the one who warned Jon he was about to be blindsided. Ultimately, I read that as her playing a smart game because she didn’t think the time was right and/or needed Jon and Jaclyn, but it’s still oddly frustrating. It’s like someone who has an ice cream cone flinging it into the dirt, stepping on it, and then saying, “Oh, I wish I had some ice cream.”

To use that metaphor again because I am tired and don’t know how else to end this, I really hope Natalie gets some ice cream next week.