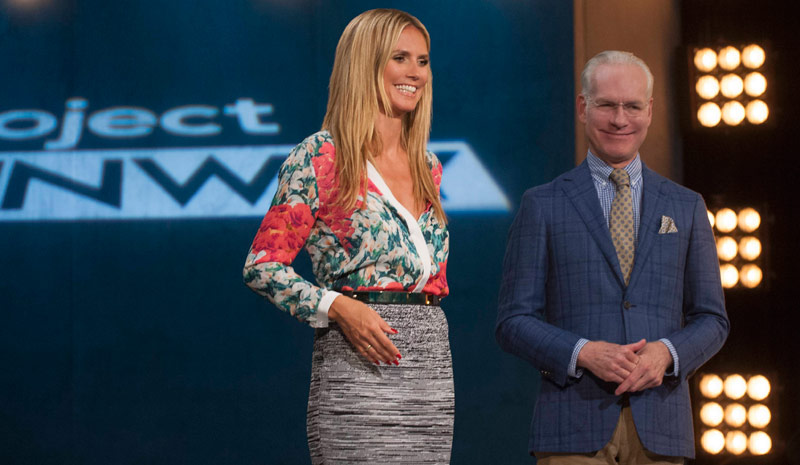 Project Runway turned 10 years old this week. On Dec. 1, 2004, a Wednesday, the series debuted on Bravo, introducing talent into reality television talent competitions. The show put professionals to a high-pressure test, and while that often produced drama, it was only their work that was judged by witty, incisive, and well-respected industry leaders.

The show was immediately a total ratings flop, earning a .17 in the demo. In that pre-DVR era, ratings dropped even further by the third episode. Instead of bailing on the show, Bravo did the reverse, repeating the first three episodes over and over again during a two-week break. When it returned Jan. 5, its ratings increased 323 percent and soon it was breaking Bravo records.

That wild swing has been characteristic of the series’ life. Just browse through all the headlines from these past 10 years to see how much it has been both in and out, to paraphrase Heidi Klum’s line.

During that time, Project Runway has produced TV and fashion stars. It has also produced crappy spin-offs. Some of its success is the product of exceptional work, while other elements seem almost accidental. For an example of that, look no further than mentor and breakout star Tim Gunn, who was only asked to be on camera at the last minute, and Tim Gunn wasn’t even paid for his work. (He was paid for season two: $2,500 an episode.)

Despite its rough start, the show quickly grew into a phenomenon, and was cloned–including by its brilliant production company, Magical Elves, with Top Chef–bringing new audiences to reality TV and more well-respected and talented people to reality television shows.

Then came a behind-the-scenes war, as the show’s owner took it to a new network and its original production company left, replaced by the producers of The Real World, of all things. Before it left Bravo, the show phoned in its fifth season. On Lifetime, the next season struggled, feeling oddly lifeless, but by season eight it had regained its footing–though that season ended with a controversial finale.

A few seasons later, though, the show lost Michael Kors and it doubled down on its worst element, team challenges, and entered what seemed to me to be Project Runway’s death spiral.

But then: A few years in to its Lifetime life, the show found itself again. It did that not by being the same, but by making changes that emphasized its core elements. There was more time with Tim Gunn, time for the judges to look at the clothes up close. The models faded into the background. Its most reason season was particularly satisfying, from the talent to the tears and drama.

In this way, it’s not unlike Survivor, which similarly reached a period of stagnation and then rebounded more recently. Yes, that rebound includes misses along with the hits, but both series have strong enough central concepts and loyal enough audiences that they can keep trying new things and occasionally keep failing. I would not be surprised to see Project Runway last another decade–and though it’ll likely mean more of those ups and downs, I’m in.