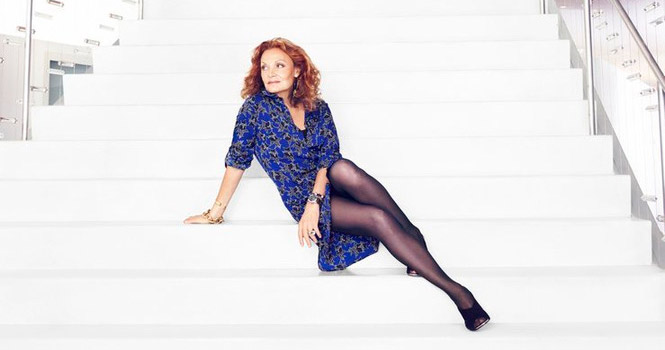 Diane Von Furstenberg is everything Donald Trump is not. (Photo by Timothy White/E!)

Diane von Furstenberg doesn’t so much star in E!’s House of DVF as wonder what she is doing on an E! series with a bunch of typical E! cast members behaving in typical E! ways. Nearly every episode, Diane–or DVF, as the cool New Yorkers call her–expresses her bewilderment that she is using an E! reality show to attempt to find a brand ambassador. Usually, she concludes that the entire thing is a disaster:

“It looks like we are not going to any brand ambasaddor. At this point, I’m really annoyed, because I don’t want to give those girls too much time. I’m really fed up; the whole thing is just–I just want to say, You know what? Forget it.”

Diane, who also appears on a quieter and more serious fashion reality series, frequently says things like this to the camera, and sometimes to other people:

DVF is frequently confronted by the reality of the girls’ behavior. On a recent episode, she walked in to a messy Long Island mansion/house that they were staying in, pizza boxes on the floor, and gathered them all around:

“Really? If this is the hardest thing you’ve ever done, then you’re not ready for life.”

As much as I love the show’s refusal to follow any kind of format–the parting gift bag appears from behind chairs at unexpected times, for us and for the contestants–it is this that I like best. It’s the fascinating combination of Diane’s and the cast’s bewilderment about their roles in the process.

There are cast members clearly behaving like they see other cable reality stars behaving (getting drunk when they’re off the clock, throwing parties, not taking a task seriously, being hyper critical of one another publicly and privately) while actually working for a very real company led by a highly respected person and then wondering why their behavior isn’t winning them favor.

No one ever quite says this, but it’s there, underlining the whole show. That’s the central conflict, not the petty fighting between the contestants or even which one of them will get the job.

In many ways, the show is what The Apprentice always promised to be but never was. The Apprentice certainly is a fascinating show, but it was never really about working for Donald Trump; even the people who did “apprentice” for him were simultaneously responsible for promoting the show. Instead, the show became more like Survivor with business-focused tasks and a one-man Tribal Council.

Here, the contestants are essentially interns, not contestants. Diane von Furstenberg’s staff gives tasks that, yes, are basically constructed challenges, but there’s also no mistaking how real most of them are; they are interacting with real clients and buyers, and have the potential to do real damage or good. It seems so risky! Though of course, getting her name and brand in front of millennials might make the exercise of the show itself worth it, whether or not Diane selects a brand ambassador on Sunday night’s finale.

Critically, though, as much as the show does promote her and the brand, it never seems as crass as it does when Trump pitches himself or the sponsors who pay to have tasks featured on The Apprentice.

As to choosing a brand ambassador, I kind of hope she does not, mostly because the contestants don’t really seem worthy of the job, but also because it would be a fascinating rejection of the premise of the show. Again, though, the show works, completely, as reality television because the stakes are so much higher than whether some obviously unqualified person gets an ambiguous job; it’s about the role reality television plays in the world and its importance even for uber-successful people like Diane von Furstenberg, who shouldn’t need a reality show but does.