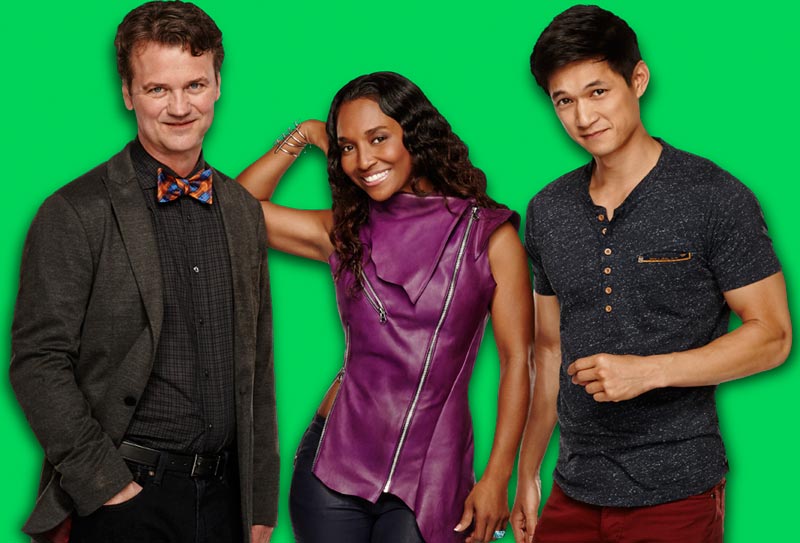 Fake Off judges Michael Curry, Harry Shum Jr., and Rozonda "Chilli" Thomas need to figure out what a "fake" is before demanding more of them. (Photo by truTV)

I did not watch all eight episodes of Fake Off, but I watched most of them, and I still have no idea what a “fake” is. But I’m pretty sure the judges and competitors had no idea, either.

A lot of these performances would have been terrific on America’s Got Talent, whose judges know how to give feedback about stage performances, probably because they don’t have to use a genre-defining word that has been totally made up. (The group that won the $100,000, Lightwire Theater, was the most AGT act of them all. Update: The group actually made it to the top eight during season seven.)

As it was, the judges–Harry Shrum, Jr., Michael Curry, and Chilli–were incoherent, both because of their demands for “fakes” (but refusal to define those, since performances that seemed to have a lot of fakes would be criticized for not having enough) and their generic feedback about improving and showing more and blah blah blah.

Yet I still watched because the performances were truly great sometimes, and had some spectacular moments, like the group in the finale who had a breakdancer spinning on his head and then spinning into the air.

The judging is fixable, and truTV has ordered a second season, so hopefully they either give up on this idea of “fakes” or clearly define it. I’d vote for giving it up, because the acts are so diverse it’s hard to describe what a “fake” (ugh, I hate that word used a noun) would be. Also, truTV has itself moved away from faking reality TV, into fun shows like The Carbonaro Effect and an actual real-life competition like this one, so it’s time to just leave fake behind.