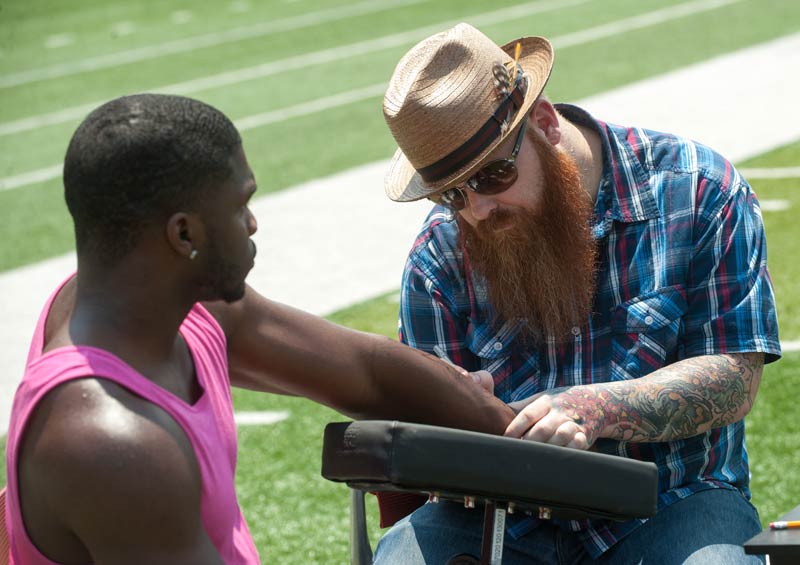 Ink Master does not fix tattoos its human canvases don't like. (Photo by Spike TV)

It’s time for another edition of Ask Andy, where I take your reality TV questions and answer them in this creatively titled column. In today’s edition, one of the most annoying thing that happens on television, plus whether or not Ink Master fixes bad tattoos and predictions about future cancellations. Have a question? Send it to me!

Do they ever fix the bad tattoos on Ink Master? –Gene B.

While an episode of Tattoo Nightmares featured someone from Ink Master getting a tattoo fixed, that’s not typical. Spike has told TV critic Rob Owen that “the reality is, not everyone leaves the show happy–this is part of the construct of the show that everyone agreed to at the outset.”

In a profile of the show’s volunteers, The New York Post reported that they “undergo a multi-step screening process, in which producers ask about their pain tolerance, number of existing tattoos and whether they’re willing to sit for hours at a time, sometimes with little input.”

Ink Master is now casting for those human canvases; the application notes that “THERE IS NO MONETARY COMPENSATION FOR APPEARING ON THE SHOW” and “Ink Master does NOT reimburse human canvas participants for travel or accommodations in connection with participation on the show.”

2015 predictions — [What will be the] first long running reality show to be cancelled? –Paul E.

This is such a hard question to answer that I don’t know if I have an answer. It’s particularly difficult because the threshold for success is lowering over time, as television audiences fragment across cable and other content providers, such as Netflix.

Paradoxically, the old-school shows are in a better position, because they have strong core audiences that it’s hard for a new show to build. (Utopia had to start from zero, whereas Big Brother has a loyal audience that generally returns every summer.)

So, I kind of doubt that one of the legacy shows will be cancelled any time soon. But then again, I never would have guessed that a television network would actively kill its own super-promising series, so I have no idea what network executives will do.

I don’t want to punt on the question, so here are some thoughts:

Why does nearly every reality show, when coming out of commercial, replay the last 30 seconds to 1 minute that happened before the commercial? –Michael A.

To drive all of us insane. At least, that’s the effect.

I hate this so much, and it seems so pointless in the age of the DVR when some people skip commercials (though, around many DVR users watch ads), but there it is. I also hate the giant supertease intros, which give away everything that’s coming up that episode, and I fast forward through those. Both of those also take up time, though perhaps that’s a blessing for those series that don’t have a lot of material to work with anyway.

The charitable answer is that networks are trying to engage people who might be channel surfing and stop on a show mid-episode, so they’ll know what’s happening and be caught up. The cynical answer is that the network thinks the show’s viewers are stupid.

It’s worth noting that not all shows do this, and several highly rated shows–Survivor comes to mind–are ones that manage to not only not repeat what just happened after a commercial break, but they don’t do pull any of that crap, like cutting to commercial at a suspenseful moment. It can be possible to have a successful show and not pander to your audience.

Have a question for me? Have insight to add, or just want to tell me how wrong I am? Send me an e-mail message or Facebook note.