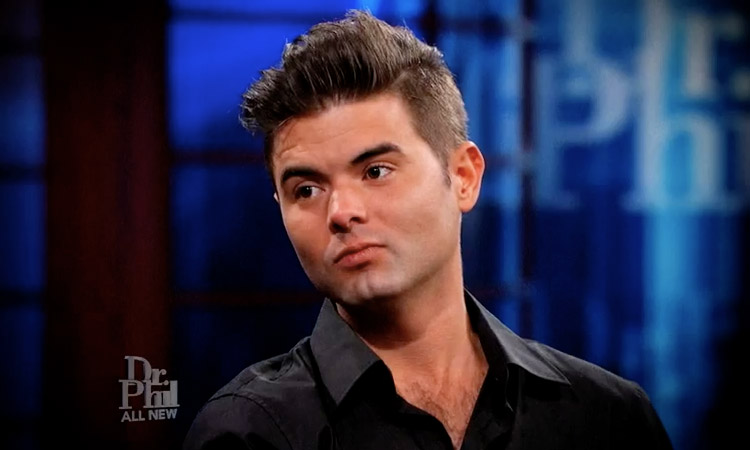 Todd Herzog was on Dr. Phil for the third time today, an episode filmed one year to the day from his first, horrifying appearance.  Because this is Dr. Phil and Todd’s horrifying alcoholism and popularity can be dragged out for two episodes, the actual result of the intervention is being saved for tomorrow’s episode.

Dr. Phil opened the hour–well, after five minutes of recapping his previous appearances–said his mom reached out to the show because she feared Todd was “days from organ shutdown and death.” He’s been drinking two liters of vodka a day–about half a gallon–and that sends him into withdraw hours of not drinking. In April, he went to the ER with a .5 blood alcohol level, which is typically fatal. Todd is hallucinating things such as miniature ninjas, a girl, and his grandmother sitting on a shelf in his closet. His stepdad said Todd “saw paparazzi and he ran out into the field to try to get away from them.”

“He’d rather die than go through rehab again,” his mom said, and that was a refrain that continued throughout the episode; Todd even said so himself.  He was particularly adamant about not returning to the rehab facility he went to in Texas last year. “I’m not going to back to Texas,” Todd said in his apartment. “I will not go back.” On the plane, he repeated that, saying he’d rather go home and “drink myself to death.”

Eventually, in the studio, he revealed that he didn’t want to return there because of his concern of homophobia in Texas: “That’s how Texas is.” It seemed like both a potentially reasonable concern and total rationalization to cover his fear of rehab and sobriety. Dr. Phil countered by saying, “You are so full of crap,” and citing Gallup statistics that there are 25 percent more self-identified gay people in Texas than in Todd’s home state of Utah.

Before showing up at Todd’s door, Dr. Phil told Todd’s mom, “If he doesn’t get on that plane tonight, then you need to pick out a casket.” The next day, on stage, Dr. Phil gave Todd’s mother a considerable hard time about her response to allowing Todd to come home instead of going to sober living in Texas, which he refused to do.

As usual, Dr. Phil framed himself as the savior, jumping on a private jet after taping his show to go rescue Todd. The show played this for maximum drama, with the hashtag #SavingTodd. It was, of course, very real–and, at times, both disturbing and absurd. “You’re not hallucinating me. I’m really here. Pinch pinch,” Dr. Phil actually said as he physically pinched Todd. He helped Todd pack by grabbing all clothes, hangers and all, and then shoving them in a pillow case. Television gold!

The most absurd of the made-for-TV moments this was that they flew Todd back to L.A. to be on the show, rather than taking him directly to a facility. After a fraught night in a hotel fighting with his parents, Todd apparently tried to leave, as Dr. Phil informed the studio audience that “this morning he refused to sign our releases and demanded his passport so he could leave.”