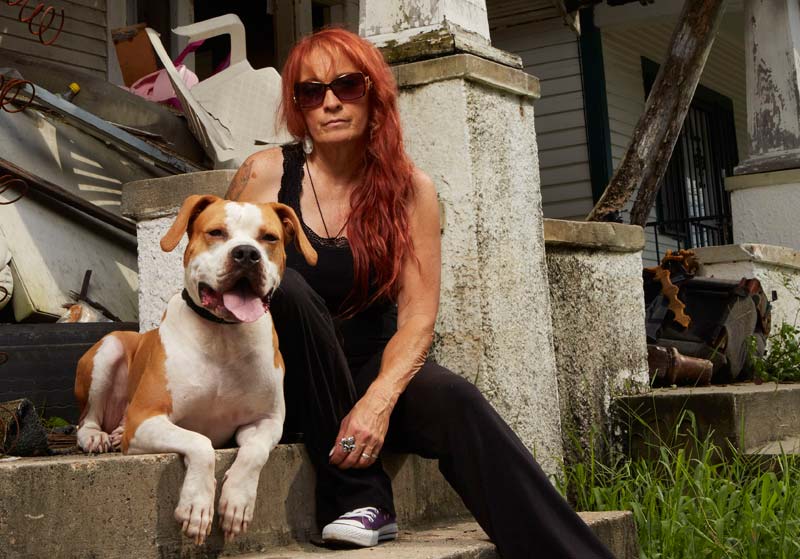 The Animal Planet series Pit Bulls & Parolees, now in the middle of its sixth season, is about how Tia Torres and her staff of parolees save pit bulls.

But the reality TV show literally saved her and her organization, the Villalobos Rescue Center.

A 2007 profile in Los Angeles Magazine led to offers from producers. Though she considers herself a private person and has turned down offers to write books about her life, she said yes.

“We were on the verge of going broke,” Tia told me, “and it came down to survival. A lot of reality people, they want to become actors—we needed to eat. My kids and I literally were going donated food for us to eat, from churches and whatnot, so we were getting ready to close down the rescue. I said, ‘We’re going to have to do this.'”

They went with 44 Blue Productions, who also produced Cell Dogs and Lockup (and now produces Wahlburgers, among other shows) because Tia thought “they’re going to get us.”

Crews for the show are “with us all year long,” she said, because “we film real. Nothing’s scripted, nothing’s set up, it just happens. We film every week, all week, all year long.”

The original plan was that the show would focus on her staff, not her, but networks said, “either you’re in it, or the show’s not going to go.” she said.

Tia said that “Animal Planet helped pay some of our vet bills, helped us buy dog food. There was almost no TV show because we had nothing. All my bank accounts were overdrawn.”

While the exposure has brought much-needed donations (the network itself has donated during special episodes), it’s also presented new problems.

The positives and negatives of fame and attention

Tia insisted that “the positive definitely outweighs the negative. The positive is that we do get more dogs homes, we do get donations to help fund our nonprofit, and most importantly, it’s changed the image for this breed.”

The series is watched by families and kids, so Tia tries to keep what happens in front of the cameras to be kid-friendly (“I don’t let my guys smoke on camera because kids watch”).

Some viewers have a misconceptions about the rescue and Tia because they’re on TV. “That’s the downside, when people assume that we are millionaires because of being on TV, and are upset that we just can’t keep taking dogs,” she said.

As to her fame, Tia told me, “I have not warmed up to it at all. It’s very uncomfortable for me; I try to embrace it but I’m not able to, still.”

Specifically, she said, it’s “the attention. People running up and losing their shit, basically. I had one woman jump on me and knock me to the ground, and just get me in a bear hug and wouldn’t let go—while I was walking a dog, she lost it. I’ve had people grab me by the hair. And this is all because they’re happy!”