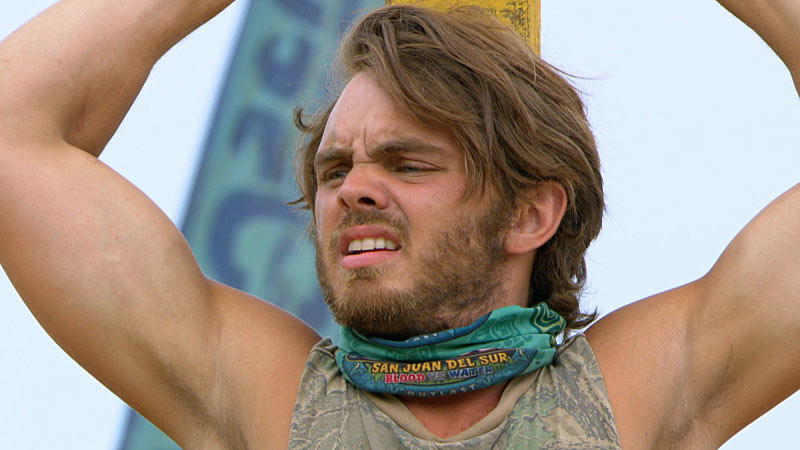 Wes Nale before he gave up immunity for chicken wings. (Photo by CBS)

I was left with many questions after Survivor San Juan Del Sur‘s second consecutive insane Tribal Council, about exactly what transpired that led to Jon and Keith playing their idols and Wes being voted out with just two votes.

I watched the episode twice to try to make sense of what happened at Tribal Council, and I still have no idea. Part of that is because we just don’t know what exactly everyone was whispering about with Reed. Very little of the chatter was subtitled and a significant amount of it was crosstalk, so much that Jeff Probst even commented on it multiple times. Then again, in fairness, these days Probst comments on everything multiple times, and then when he’s done, runs over to a small plane, puts on headphones, and zooms around in the sky to write it in smoke.

For a tangential but relevant example of that, look no further than the idols. “Not a single idol has been played yet this season,” Probst said, practically begging them to do that. He also said, “Natalie, it’s trick, because you’re rolling the dice … you can’t get to the end if you don’t survive every single Tribal.” Then he told Reed: “you don’t want [the immunity idol] to be a souvenir.” Then he grabbed a tattoo machine and wrote “PLAY YOUR IDOLS” on his forehead.

I do agree with Probst that Tribal Council was “fantastic to watch” even if it elicited a “Wait, what?” instead of a “Hells yeah! That’s how you play Survivor!”

It is clear that Natalie’s warning (“dude, play your idol”) prompted Jon to do that and prevented him from being blindsided by the four votes from Reed, Alec, Keith, and Wes, but not why she knew that. Was as simple as being tipped off by Keith’s utterly dumb “stick to the plan!” comment? Or is she more astute and attuned to the game right now than Jon? (Well, yes.)

Yet there’s Jon, getting the hero’s edit.

Jon is the alpha strategist this season in the same way that a house cat is an apex predator: there are no other options. There’s been a frustrating amount of attention given to him this season–so much attention that in this episode, he was the one who revealed to the camera that Jaclyn can’t have children. Yes, he had a nice response to that, but shouldn’t that have been left to her to explain or reveal to a national audience? It just didn’t feel like his story to tell.

I understand why it was included at that point in the episode, since it tied in perfectly with the reward, a visit to a ballpark where the winning team distributed baseball equipment to kids. Despite having won the right to go on the reward during a welcome water challenge, Reed gave up his reward to Missy, because Baylor cried about Missy not having won a reward.

Yes, because giving up a reward worked so well last time.

The immunity challenge functioned as proof that the cast is not given access to razors, and was also not product placement for Mark Burnett’s next Jesus movie, even though it was an endurance challenge where everyone basically assumed the crucifixion position. But don’t take it from me, a heathen, listen to Alec: “it’s like Jesus on the cross, baby!”

They were tempted with food, and while I can imagine how challenging it must be to choose between physical pain and safety and no pain plus food, Jon jumping down after seven minutes for candy was absurd. I understand Natalie’s rationale for jumping after three hours much more–she knew she was done, and just wanted to get something in return, but seven minutes? I guess Jon felt very comfortable and safe in his edit. Meanwhile, Natalie and Reed hung on for three hours, so long that their bodies fused into that position.

The absolute best part of the challenge, though, was the awkward chitchat with those who were out, and by that I mean Wes making Probst uncomforatable by referencing Probst’s nude Two and a Half Men scene. “That was fun,” he said with a tone that suggested it was fun but he’d rather not be talking about it when he could be telling them how to play to make this season better.

What is it with this season?

I give Reed credit for using his immunity to attempt to dethrone Jon, and it seems likely that if it wasn’t for his drip ally Keith, Jon would be at Ponderosa, drawing everyone pictures of Jaclyn’s reproductive system.

The biggest question I have, however, is why that Tribal Council moment was so dramatic yet, overall, fell so flat. As the infinitely more optimistic Gordon Holmes wrote in his recap of the episode, “it’s odd that a season with so many big moments and interesting strategies just isn’t clicking.”

Yes, it is odd, odder than that night-vision footage of a hairy sloth humanoid thing crawling through the jungle like Survivor had become a Japanese horror movie. If the teaser isn’t lying to us, and it probably is, next week this season becomes an ABC Family drama with Jon and Jaclyn fighting. I can’t wait.