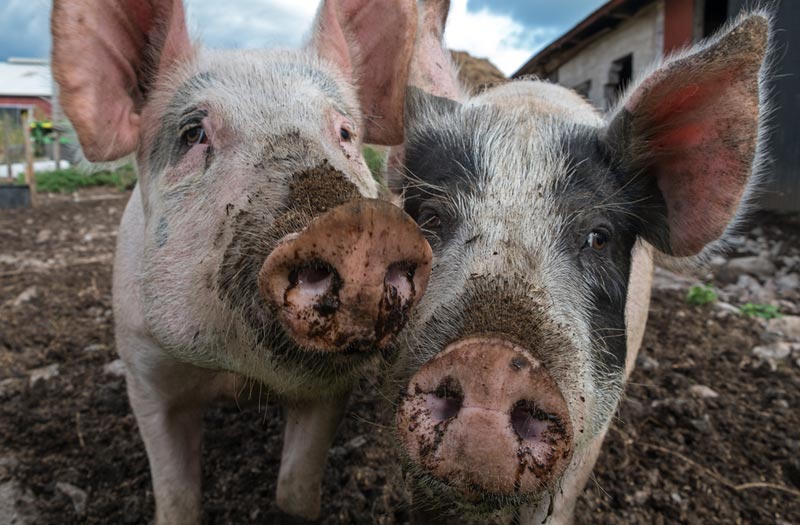 A representation of Survivor's Alec and Keith that is not fair at all--not fair to the pigs. (Photo by Shutterstock)

Survivor is no stranger to sexism from its host or players, but rarely has it been so blatant or gross as it was last night, and rarely does it result in such clear consequences–though, sadly, it was not for one of the people behaving badly, but the most threatening member of their alliance.

The result was another fairly satisfying self-contained episode, not quite as spectacular but similar to the one when Drew brilliantly orchestrated his own exit. It was a definite upswing from last week’s flat episode; this season sure has been uneven.

Our first true reward challenge of the season was quite physical and sent its winners to a taco bar (with vegetarian options!), where they just ate and drank (“are we supposed to be talking strategy like other people do at rewards?” Natalie asked, in a rather meta moment). The challenge also sent Jon to Exile, where he found an idol, and my reaction to that was approximately the same as watching a bird pick up a stick: an indifferent good for you, now you have a stick.

I think I have Jon and Jaclyn fatigue, in part because we’ve now seen this “we have to make a choice” thing multiple times, and while it may be true, it’s repetitious. However, it did have consequence.

For the first time in a long time, Exile Island actually paid off, since Jon’s absence led the other tribe’s men, except Jeremy, to treat Jaclyn like shit, kind of like they treat the other women. The behavior was appalling.

Part of it was just unnecessarily gross, like Wes’ discussion of his bowel problems leading Alec to say, “I wish I had burps and farts. If I did, I would make sure [Baylor] smelled them.” Keith’s fantastic Tribal Council defense of his son and company’s disgusting behavior was to say,  “We’re not at the Hilton,” which should clearly be an ad campaign accompanied by their new tagline, “Hilton. When you’re here, you’re not farting.”

There was more–and it was clearly sexist and chauvinistic.

Keith, who I liked better than Dale but now makes me want Dale back or, better, makes me wish Survivor would cast a non-dickish old man, basically said he’d spank Baylor for what he perceived as her lack of work: “If you were my kid, you would have done got whooped ’bout seven times today,” Keith said. I think Keith should be glad that it isn’t general policy to hit people when they don’t meet our expectations, because he’d have done gun whooped so durn much his head wud be spinnin’.

Alec similarly seems to think the women are there for him to order around: “throw it away, in the water,” he demanded to Baylor after handing her fish guts. Walking away with Wes, he said, “girls, keep this fire going,” he said, adding that “Natalie will do it; I don’t know if [Baylor and Jaclyn] will.”

That 1-2 punch of orders and insults stunned Jaclyn so much that she decided right then she was not staying with their alliance.

Once Jon returned, he protested, arguing Jeremy should be voted out, but it seems that Jaclyn was serious about bailing on the alliance, and they joined with Baylor, Missy, and the misfits to vote out Josh. I’m glad they did–it’s nothing against Josh, really, but mostly against his alliance of awfulness.

And while I wish Alec or Wes or Keith had been punished for their behavior, the alliance of single people is at least attempting  some semblance of a smart game, voting for the perceived master strategist. Hopefully the trio will be next to leave, in quick succession. (The preview for next week looks like his exit inspires some desperate/bold game play on Reed’s part, which seems fun.)

The no-longer-dominant alliance voted for Baylor because their intended target, Jeremy, won immunity, and he’s a clear threat at this point–as Jon pointed out, he has a compelling story to tell at the end, though, let’s be honest. Juries are most likely to vote based not on a story, but on their personal bitterness.

The immunity challenge he won is a challenge I like, because it’s all mental, and it’s good to change things up. It 1) seems to me to be mostly about ignoring all of Probst’s chatter in-between guesses, which are distracting, and 2) always impresses me because, sitting on my couch with a stomach full of huevos rancheros and tortilla chips, I cannot even remember the first symbol. So no judgement from me here, just applause.

By the way, you can thank EW’s Dalton Ross for saving the challenge: he wrote an e-mail message to Probst about it and convinced him to keep it, similar to the way Amazing Race‘s Mike White ended Redemption Island by reacting negatively to it while having dinner at Probst’s house. The lesson: if you have Jeff Probst’s attention, ask for what you want on Survivor and you may just get it.