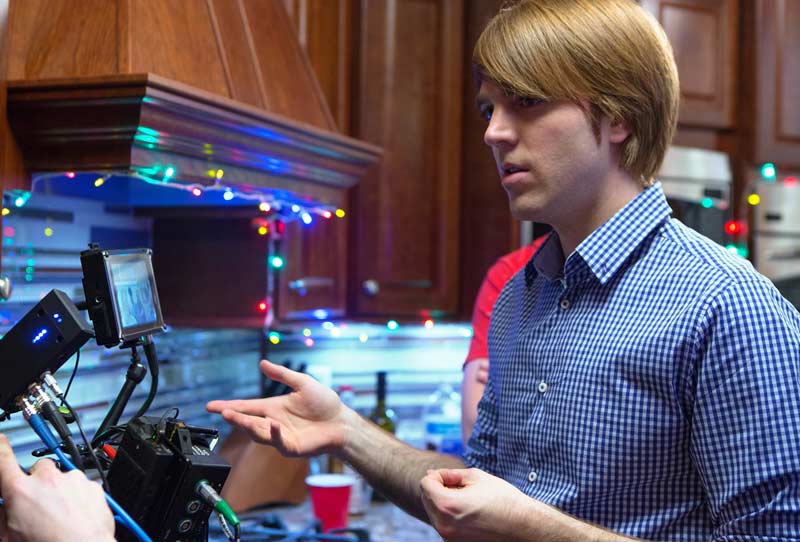 Shane Dawson has won The Chair and $250,000, a coda tacked on to the ending of one of the best reality TV series I’ve ever watched. I talked to him about making Not Cool under the scrutiny of reality TV cameras, criticism of his work (including from Zachary Quinto), how fair the competition was considering his millions of followers on social media, and Shane’s love for Big Brother and Julie Chen.

The fairness of the competition

On Saturday night’s finale, executive producer Chris Moore said that 40 percent of the surveys were thrown out because questions were answered incorrectly; Shane told me that they also discarded votes where it a respondent was clearly voting against one person and for the other: “They threw all the votes where people gave me all 100s and all her zeros, and vice-versa, and they were only left with 5,000 votes or something, which is not that many,” he said. “In all honestly, we both had a pretty good chance.”

Still, Shane knew from the beginning–as Anna Martemucci did–that the playing field could be uneven. He said, “I talked pretty much every day openly about it to Chris and to Josh [Shader] and to everybody else. How are you guys going to make this fair? And I think they came to a pretty good conclusion.”

Yet his winning seems to confirm what most people thought was inevitable: that his fans would vote for him and Anna never had a chance. “The fact that I won, I don’t think that it was a bunch of Twitter kids,” Shane told me. “I genuinely think it was The Chair audience, because they were pretty invested. If you go to The Chair‘s Facebook, there’s so many comments from people that aren’t my demographic, that said they didn’t know who me and Anna were, and they enjoyed my movie.”

Those who accuse him of winning just because his fans voted, or even cheated (some revealed the quiz questions to each other online), “It’s mean-spriited and I’m sure that there’s going to be a lot of them that to come. It is what it is; I know that I made an entertaining movie and I don’t feel guilty for winning. I don’t think it means I made the better movie; I don’t think you can say a movie’s better than the other one. I’m ready for the backlash, but I’m also not going to engage in it.”

On The Chair, Shane expressed less anxiety about the documentary than Anna (read my interview with her), but he did have concerns. “I’m kind of used to documenting everything myself. It was a little hard to have somebody else do it because I couldn’t make sure there was no double-chin angle, things like that,” he said.

“I was a little nervous that my audience would watch it and be like, ‘Oh, god, Shane’s so serious, he’s so depressed all the time, he’s so angry all the time. In reality, I’m a pretty serious guy, but of course they used all the parts where I looked like I was going to killed somebody,” he said. “It was like a montage of Shane looking like he wanted to kill himself.”

Still, he told me, “I think the show was really accurate. They showed the process, they showed how hard it can be sometimes. I definitely don’t think they showed that many successes; every day me and Anna probably both had the same amount of awesome things happening, but that’s not very interesting. I understand why they probably didn’t include that much.”

“Now, forever, I can watch the making of my first movie in some high-quality, well-edited documentary,” he said. “It’s pretty cool.”

On the critical response to Not Cool

As the finale covered, Shane’s movie was eviscerated critically. The most brutal review was in the Los Angeles Times, where Robert Abele called it “persistently ugly” and “a frantic machete swipe — at comedy that only date-rapists, racists and sociopaths could love.”

Shane told me that “it was hard hearing and reading things that were not just reviews, but they were really, really personal. Most of the reviews weren’t even about my movie, it was about my audience and the Internet and the culture. Using words like racist, and homophobic, and misogynist–all these things that my movies clearly weren’t, which was incredibly shocking to me. And I also think reviewers were just trying to get people to click on their review, and an easy way to do that is to say, ‘The worst movie ever and Shane’s a racist!'”

What Shane got from the show’s mentors

Some of the most blistering criticism came from someone who helped fund the project: Zachary Quinto. “It was hard having Neal [Dodson] and Zach publicly bash the movie, especially since they had no hand in helping make it,” Shane said. “It just felt a little tacky and unprofessional, especially since they’re friends with Anna and her family. [People] say that it’s unfair that I have fans, but it’s also unfair because the other team is family friends with the producers. It’s pretty evenly unfair.”

While Shane initially expected that Zachary Quinto would “be a mentor and help me and teach me about Hollywood,” he admits that “I wasn’t being realistic: he’s an actor and he’s busy. He just wasn’t around.”

But he did have a great experience working with Chris Moore, Josh Shader, and others. “Chris Moore’s been one of my heroes forever; I watched Project Greenlight, every season, and to work with him every day was incredible and life-changing, and I learned so much. That was a dream come true,” Shane said.

Criticism of his comedy

In September, Shane posted an apology for the content of some of his YouTube videos. On the show, the owner of a tattoo shop that Shane used as a location was particularly critical while talking to Chris Moore (“that tattoo shop lady was–come on, I’m not going to say too much about her”).

He said that wasn’t connected to the show, but admits that criticism of his comedy “was hard; having your name thrown through the mud for six months is never easy, but in the end, the audience voted, and that’s all I care about.”

Shane told me, “I never do anything intentionally to offend people. My comedy is really offensive, and sometimes I push the line too far, and I always apologize for it if I offend people too much.”

In the finale, when Shane meets Anna for the first time before their press conference at the Television Critics Association summer press tour, he tells her that he’s so nervous, “I’ve been watching Big Brother live feeds all night.”

I asked him about that, and Shane was thrilled to talk about the CBS summer competition series. “Big Brother is my favorite show of all time,” Shane he said. “I’ve seen every season. I watch the live feeds, I follow all the Twitters. I follow all the Big Brother contestants, and then I still follow them after the show’s over even though it gets a little depressing becuause they’re all performing at Bar Mitzvahs and tweeting out their merchandise.”

In case that wasn’t enough praise, he said: “Big Brother is the perfect show. Everything’s about it is perfect. Julie Chen is perfect, the editing is perfect.”

Shane was actually in the studio audience last year, during Big Brother 15, when Amanda was evicted, and he had some interesting behind-the-scenes information.  “I went to a live taping once, where Amanda got evicted,” he said. “It was the best time of my life.” But he wasn’t happy with the way the audience was instructed to respond. “I loved Amanda because she’s a villain and I love villains. The guy in the audience, the warm-up guy, kind of told us to boo her. I didn’t boo her, but he kind of encouraged it, and it kind of made me sad. I hate when people get booed.”

I asked if he was watching other reality TV, and he said no. “Once Big Brother ended, I went into a sad depression and turned my TV off,” he said. “Why don’t they do it year-round? Like a winter Big Brother. Come on!”

What Shane wants for Not Cool

“I would love for people to watch it for themselves,” he said, “and make an opinion based on their own opinions, and not just, ‘Oh, Zachary Quinto hates it, so I think it’s terrible’ or ‘It got a bad reviews because it must suck.’ Watch it for yourself, because there’s a lot of movies out there that get bad reviews that people don’t like that millions of other people like. I really hope people give it a chance. I hope people don’t just think, ‘Oh, he won because he’s a YouTuber.’ I think I made a really entertaining movie and an audience-pleasing movie, and I hope that more people watch it.”