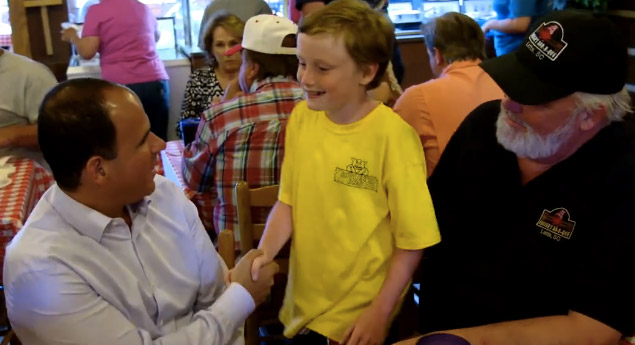 Marcus Lemonis and Shuler on the "Shuler's BBQ" episode of CNBC's The Profit.

Marcus Lemonis, star of The Profit, has asked his social media followers to “share in” tonight’s episode of his CNBC show, calling it a “holiday gift” that’s “very near and dear to me.” He also says that it is a highlight of his three seasons investing in businesses and making the series. Marcus wrote on Facebook :

“I rarely ask for favors from people but here it is. Tomorrow nights episode is something very near and dear to me. The start of the holiday season means the reminder of our need to be thankful, our love of family and our passion for our country. Tomorrow nights business represents one of the best experiences I have had making this show over the last two years. I ask that you invite your friends, co workers and family to share in it with me. Thank you for passing on this holiday gift.”

From the episode’s first 16 minutes, which you can watch below, it’s not immediately evident how the episode is different. There’s a hint, though, in that Shuler’s BBQ is a family business named after the owner couple’s son, who Marcus meets and says, “Did you know that you and I have something in common? We’re both adopted. Did you know how lucky you are?” That leads to an emotional moment where Shuler’s mom cries, and they talk about how they want to leave their business for their son.

In its third season, The Profit remains a compelling series, one that has avoided the traps that other business makeover shows have fallen into. Each episode is different because each business is different; some work out and some do not.

Its greatest weakness remains–episodes tend to end abruptly, without any kind of satisfying resolution. The final episode this season will be follow up with several of the businesses featured so far, but I’d guess those won’t have the same kind of perfect resolution, either. That’s because this isn’t the kind of show that plugs a business into its formula (surveillance, test/taste, screaming, makeover, relaunch, done). By comparison, on The Profit, some renovations take months and don’t even start until after the episode is filmed.

The Profit ultimately feels more like a documentary that just highlights things from the limited time cameras were present, and if the byproduct of that is rough edges, I’m okay with that.

Watch the start of tonight’s episode: