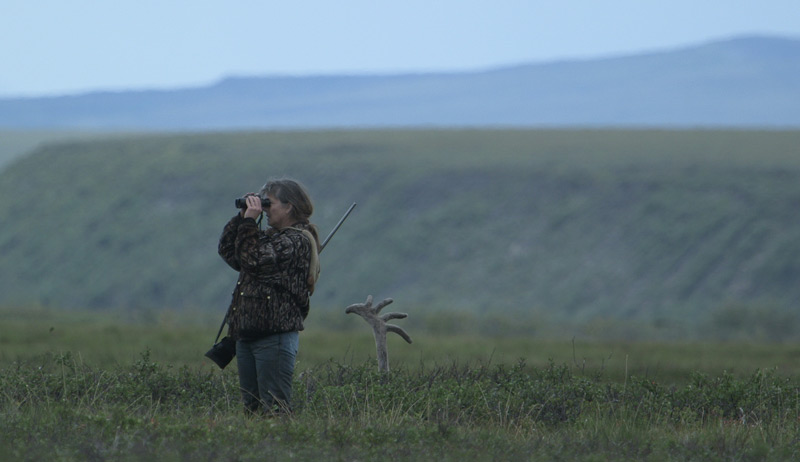 National Geographic Channel’s Life Before Zero returns tonight for its fourth season. It’s one of many reality shows set in Alaska, focusing on people who live far away from civilization as most of us know it. Although it focuses on multiple people, the show’s break-out star is Sue Aikens.

Besides appearing on Mark Burnett’s show Sarah Palin’s Alaska, Sue appeared on a few episodes of Discovery’s Flying Wild Alaska, which shares a producer with Life Before Zero, who approached her about doing the show. She told him, “I will never do anything scripted. If you turn around and say, ‘I think it’ll look great if you fell through the river, I’m gonna say, ‘Fuck you.’ There’s enough interesting things that happen; you do not have to fabricate.”

You can see why she makes such a great subject for reality TV, and her candor and good nature were both evident when I interviewed her this summer. Although she is now a reality TV star, she’s not one to be changed by that experience.

Sue runs the Kavik River Camp, which costs $350 per person per night. “People have billed it as a hunting camp and it’s certainly not. Hunters come there for about four or five weeks out of the year, but the majority of the clients, eco-tourism, the bird-watchers,” she said. “It’s my goal to have people see and enjoy a rawness of nature that they’re not going to see anywhere else.” She pointed out that, as a white, non-native person, “In order to be there I have to lease land from the state and have a profitable business,” she said. “If I go into the red, I’m out.”

Working with a camera crew has presented challenges for her. “I’ll be all ninja and I’ll turn around here’s a 6-foot guy wearing a blue jacket being a 6-foot blueberry and the birds go…” Sue makes a flapping noise, and continues: “Well, the audience only sees that. You suck, Sue, you never get anything. Well, I have Sasquatch behind me wearing blue. So it’s been a learning thing.”

She said that the crew is “very respectful” and “it’s pretty neat how we’re all growing as a small community to get it done.” The producers work with her to figure out when to film, but Sue was characteristically blunt about the fact that she’s going to do what she’s going to do, whether the cameras are there or not, whether the crew is ready or not. “Interesting and unique things happen not on a schedule. You can’t schedule the crazy stuff, it just happens,” she told me. “Life doesn’t wait; neither do I.”

The crew has its own camp and safety person, who she said watches their backs and also handles logistical things like cooking and cleaning. “That way, I’m doing my thing. If I come out, my hair’s all fucked up, I’m scratching my butt–that’s what I really do and they’re filming that. I don’t have to cater to them.”

Along with her bluntness and honesty, Sue also comes across as very caring and passionate; she clearly loves what she does and where she is. She talked to me about getting down on the floor and coloring with kids who visit the camp, or “make a playground for the foxes” in the snow. “Occasionally, life is boring, and that’s part of life’s story, too. But my boring may not be your boring. For an easy, boring day, I have 15 foxes that just hang out with me and do their thing. I don’t feed ’em, I don’t train ’em, after 12 years they know I’m not gonna shoot them, so they buddy up to me. 60 mile-per-hour winds, things falling through your roof: that’s a regular day.”

I asked Sue what attracts her to being filmed for this show and the others she’s done. “That’s a weird way to word it,” she said. “I am not ‘attracted’ to doing reality TV. I am not out there saying, ‘Look at my hooters, show me on TV.’ They asked me if I would do it, I through back the requirement of no scripted anything. I swear, I smoke cigars, and barely brush my hair. You want to show me how I am? That’s awesome, we can work this out. If you don’t, then have a nice life. I’m not going to miss you. I’ve got a life I want to live and there’s all kinds of shit to explore.”