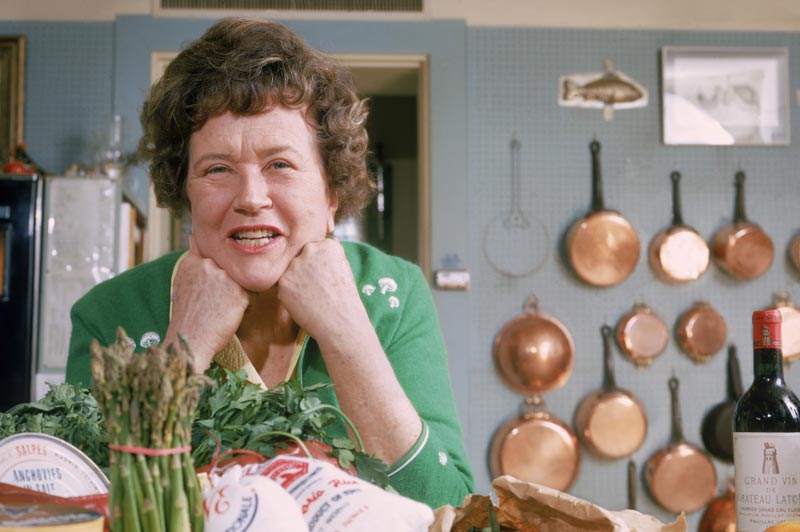 Julia Child is one of the "food revolutionaries" featured on the first episode of National Geographic's six-part documentary series Eat. (Photo by Hans Namuth/Getty Images)

Nancy Barber is a friend and writer who knows food better than I do, having written about local Florida restaurants, among other topics. So, when National Geographic invited reporters on a sponsored trip to New Orleans to learn about its three food-focused reality series, I asked her to cover them for reality blurred. In the first of several pieces, she reports on this weekend’s series, and what some of its stars think about the state of food reality TV.

Iron Chef America, The Next Iron Chef, and Cutthroat Kitchen judge Simon Majumdar is one of the expert witnesses in EAT: The Story of Food, National Geographic Channel’s six-hour, three-night documentary that premieres tonight.

At a New Orleans screening of EAT, Majumdar, who’s also a writer (Eat My Globe and Eating For Britain), said that while television shows all involve educating, entertaining, and informing, “the pendulum kind of swings. At the moment, the popular appeal is for competition shows. At some point, though, people will go, ‘Well, we also want to have some education.’”

Nat Geo is banking that enough of us are at that point now.

L.A. celebrity chef Eric Greenspan, another expert featured in EAT, is no stranger to competition shows, having appeared on The Next Iron Chef, Iron Chef America Countdown, and Cutthroat Kitchen, among others, and he too sees the pendulum on the move. “I don’t believe in culinary competitions, first off,” he told reporters. “I think it’s ridiculous. I tend to do it because, you know, the price is right, and it’s fun.”

“One of the things that excites me about National Geographic going into the food world is I’m a college-educated guy, and I like thought-provoking, intelligent programing,” Greenspan said. “Even when it was Bobby on a grill, I thought the Food Network was entertaining, but it was instructional.”

Now, however, Greenspan explained, “Food Network is going the route of MTV: It used to be videos and all a sudden it was just reality TV shows—that’s all they did. And Bravo was now all housewives. But Food Network is now all competition shows.  There are so many different parts of food that are as interesting as watching us dudes butcher a chicken really fast and come up with some crazy idea of how to use Progresso friggin’ soup.”

Nat Geo’s EAT is only their latest product in a sprawling media initiative about food. The society’s multiyear, multi-platform focus on food began with a May 2014 cover story to inaugurate the magazine’s eight-month series on “The Future of Food.” The Society also launched an expansive NatGeoFood.com web portal; a free iPad app compiling the magazine’s stories; an NG Live series, featuring presentations by chefs and food experts; an exhibition at the National Geographic Museum entitled “FOOD: Our Global Kitchen;” several new books on food; and a food educational curriculum for primary and secondary schools.

Each platform attacks food from a different direction. For example, while the magazine concentrates on our profligate present and the challenge of trying to feed an expanding population in the future, EAT: The Story of Food chooses from over 80 interviews with chefs, historians, critics, and science experts to emphasize food’s passionate present and surprising past.

“What was fantastic about this,” executive producer Pamela Caragol Wells told reporters, “was we really let these amazing minds and voices craft the editorial series and allow us to come up with the themes that we then wrapped these six shows around.”

EAT focuses on how food impacts our lives. After watching the first episode, you’ll never again think about Christopher Columbus, New York City, or Chef Boyardee Spaghetti and Meatballs in quite the same way. The only downside to the documentary is listening to the experts spell their names, but that gets less intrusive after the first episode.

Nancy Barber teaches writing at Stetson University. She worked as a journalist before getting an M.A. in English from Stetson and an MFA in poetry writing from the University of Florida.