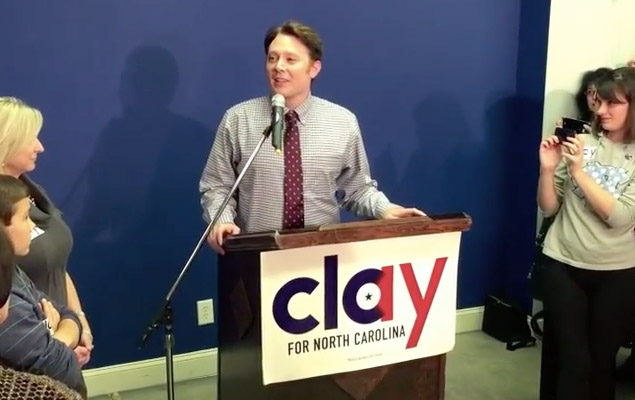 American Idol and Celebrity Apprentice runner-up and Clay Aiken won’t join Real World cast member Sean Duffy in Congress: Clay was defeated in his bid to become a representative, while Sean, a Republican, won a third term. Clay only got 84,826 votes, 41.1 percent, while his opponent, Renee Ellmers, received 121,337 votes for 58.9 percent.

Ellmers opponent began the reality TV-focused trash talk immediately when he announced his candidacy earlier this year. In May, Clay’s primary opponent died shortly after the election.

The News & Observer uploaded video of Clay’s concession speech to YouTube; for whatever reason, it cuts off in the middle of his speech. (The paper’s video of Ellmers’ speech starts in the middle, though it goes all the way to the end.) That’s a speech that he had to re-start because his mic was off, and a kid had to turn it on for him. Clay just can’t catch a break.

Now a three-time runner-up, Clay referenced his previous reality TV losses in his speech. “We’ve walked down this path once or twice below,” he said. “When, about 11 years ago, after American Idol, we came up short in another vote, we found reason to be to happy, we found opportunity to see a win.”

I wish I knew what he said next but the video ended about as abruptly as his run for Congress.